By Carol Shaughnessy|2020-09-16T16:02:43-04:00September 16, 2020|
A family poses for a photograph at the Southernmost Point marker in Key West — which commemorates the southernmost spot of land in the continental United States. Nearby stands a bronze sculpture of Al Kee. (Photo by Laurence Norah, Florida Keys News Bureau) 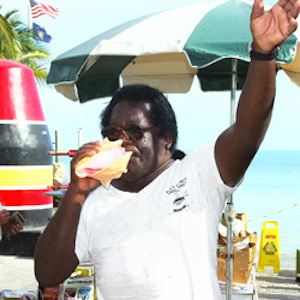 In fact, Al’s father spent much of his lifetime selling sponges, fish, coconuts and shells at the Southernmost Point. Al and his family carried on the tradition after his father died in 1993 — blowing an enthusiastic blast on a conch shell whenever the Conch Tour Train happened by, slicing open coconuts for those who wanted to drink the sweet coconut water inside, and posing for innumerable visitor photos.

A bishop of his church, Al took his religion as seriously as he did his work of brightening visitors’ days at the Southernmost Point. He was also a fixture at the annual Conch Shell Blowing Contest. To many longtime Key West residents and visitors, Al Kee — who died in 2003 — epitomized the authentic, historic, funky spirit of the island.

In March 2015, people who remembered Al, and appreciated the “old Key West heritage” he represented, gathered at the Southernmost Point. There they witnessed the unveiling of a life-size bronze sculpture of the “conch ambassador” in the spot where he worked for countless years.

“Each day Bishop Kee, a preacher and a leader of Key West’s Bahama Village neighborhood, could be seen at the Southernmost Point greeting visitors with a cheerful wave and toot on a conch shell,” said Bruce Neff.

Bruce, an expert on the island’s past, is dedicated to preserving and honoring that past. His Historic Markers Inc. spearheaded community support for the sculpture of Al Kee.

“He and his father before him left a 50-year legacy of welcoming all who visited the Southernmost Point, popularized conch shell blowing, and were emissaries of the multicultural, multi-ethnic community that has made Key West unique since its inception,” Bruce emphasized. 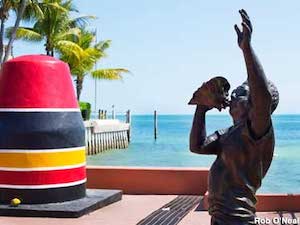 The marker, a larger-than-life buoy that delineates the continental United States’ southernmost bit of land, overlooks the Atlantic Ocean at Whitehead and South streets. Its brightly painted body bears lettering that proclaims it stands just 90 miles from Cuba, and it is seemingly a magnet for visitors.

According to Bruce, the marker’s waterfront location once was the place where the island’s Afro-Bahamian fishermen anchored their boats, sold their catch, and enjoyed a small slice of beachfront before 1969 when Florida beaches were desegregated.

Today, nearly everyone who comes to Key West eventually winds up in line beside the somewhat ungainly landmark, patiently awaiting their turn to take a photo or snap a quick selfie in front of the marker’s red, black and yellow expanse.

“Over the years, Bishop Kee and his father watched the Southernmost Point evolve into a spot to which thousands of tourists flock for their photos,” explained Bruce.

The sculpture project was undertaken in collaboration with the City of Key West and its Art in Public Places Board, and the bronze of Al Kee was crafted by local sculptor Tom Joris. Depicting Al blowing a large conch shell and waving a greeting, it will remain on permanent display at the Southernmost Point — a fitting memorial to Key West’s “conch ambassador.”