Savor Suspense in Key West with ‘Most Wanted’ Mystery Writers

A group of unusual suspects is reportedly converging on Key West — a gang of “perps” accused of penning the contemporary world’s top thrillers and mystery fiction. 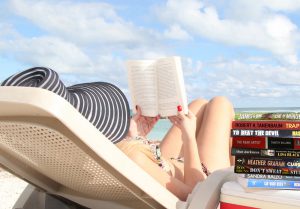 Florida Keys TV host Jenna Stauffer dives in to the works of some of her favorite authors in anticipation of the annual Mystery Fest Key West. (Photo by Carol Tedesco)

That’s right, some of the decade’s “most wanted” mystery authors are gathering for a sinister meeting in the island city, a locale whose edgy atmosphere makes it a natural haven for renegades. Inside sources believe they’re planning to hold clandestine discussions with book lovers, aspiring authors and perhaps even law-enforcement experts.

As a respectable citizen, should you be worried? Absolutely — if you’re not registered to attend the sixth annual Mystery Fest Key West. But if you are registered, please remain calm … because there’s still plenty of time to get to the island for the June 28-30 conclave.

It’s no mystery why, after the last five years’ festivals, organizers were allowed to remain at large to plan their 2019 caper. After all, Mystery Fest Key West brings together readers and writers seeking clues about crafting and enjoying suspenseful fiction — and gives them a chance to meet and learn from notable American authors.

The scene of the crime is The Studios of Key West (coincidentally located just a few blocks from the historic Old Jail Facility).

The star of the dastardly doings is world-renowned suspense thriller writer Jeffery Deaver, whose 40 novels include the highly acclaimed Lincoln Rhyme volumes such as “The Bone Collector.” (Those in the know will recall that the book became a first-class film featuring Angelina Jolie and Denzel Washington.) 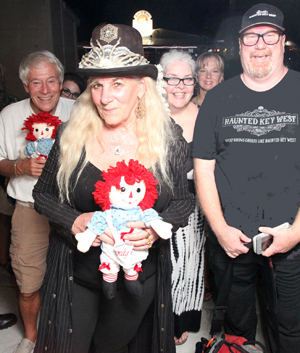 Equally notable is “repeat offender” Heather Graham, a regular festival headliner whose “Krewe of Hunters” books rank high among her more than 150 novels and novellas. (Don’t miss “The Cursed,” detailing the haunting happenings at a fictional Key West bed-and-breakfast, and the “Bone Island” series that features a dashing — although deceased — privateer named Bartholomew.)

The sleuthfest starts at 5:30 p.m. Friday, June 28, with a reception hosted by Heather Graham and Key West Mayor Teri Johnston at the Custom House Museum. The following day, during closed-door sessions, the gang of literary miscreants will discuss forensics for writers, plotting a mystery, the state of the publishing industry, how featured authors got their start, the reasons they write specific types of mysteries and other shady topics.

Attendees can also enjoy meet-and-greets with presenting authors, book signings and social gatherings at suspiciously atmospheric Key West spots. They can even sleuth out their favorite libations at a rum sampling at the Hemingway Rum Co. Distillery. (The distillery honors legendary writer Ernest Hemingway, who lived in Key West during the 1930s.)

Other festival highlights include the presentation of the Whodunit Mystery Writing Award. The winner receives a book-publishing contract with Absolutely Amazing eBooks among other prizes.

Obviously, organizers won’t put out a BOLO if you don’t make this year’s Mystery Fest Key West. But only the truly clueless would miss the chance to meet and “interrogate” the featured lineup of literary superstars — so click here to register for 2019’s “criminal” proceedings.