This month our Pride celebrations included an aquatic adventure in the Florida Keys National Marine Sanctuary. The sanctuary, formed in 1990, incorporated two preexisting marine preserves AND the continental United States’ only living coral barrier reef, and protects some 2,900 nautical miles of ocean waters. 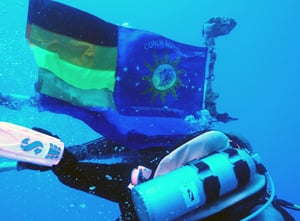 In May of 2009, the Florida Keys took another step to protect our treasured reef ecosystem and — after more than a decade of planning and funding totaling $8.6 million — sank a historic ship to become an artificial reef.

The USNS Gen. Hoyt S. Vandenberg, which was a missile tracking ship during the Cold War, was cleared of contaminents and sunk in nearly 150 feet of water about seven miles south of Key West. At 523 feet long, it’s the second-largest vessel in the world purposely sunk to serve as an artificial reef.

Weighing 17,000 tons and rising 10 stories tall, the massive ship has been underwater for a decade now and is home to countless species of fish and invertebrate sea life. The entire ship, including its railings and satellite dishes, is encrusted in algae, soft corals, barnacles and sea urchins — providing an invaluable food source and habitat for fish.

The Vandenberg has also become a scuba divers’ mecca. And recently, some of our LGBTQ divers expressed an interest in having a rainbow flag displayed on the shipwreck along with the existing American flag and Keys’ Conch Republic flag.

So we made the request and it was approved by the powers that be. The installation of the flag took place June 7, just in time to be part of our Pride celebrations. It’s believed to be the first rainbow flag in the world to ever be displayed on an artificial reef — how cool is that?

FYI, the Vandenberg’s rainbow flag is not the traditional version, since it also has the Conch Republic emblem on it. The combination Conch/Pride flag was commissioned and made locally by one of Key West’s seamstresses. The three-foot by five-foot creation features the Conch Republic emblem embroidered on both sides and includes five stainless steel grommets on the edge, which were fastened to the Vandenberg. 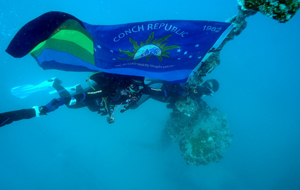 Plans call for the flag to be permanently displayed and waving proudly as it follows the natural tides of the Atlantic (with periodic replacements).

You may be wondering, “What is the Conch Republic?” Well, back on April 23, 1982, the Florida Keys staged a ceremonial secession from the United States to protest the installation of a U.S. Border Patrol checkpoint that stopped traffic at the top of the Overseas Highway — the only road in and out of the Keys. After seceding, we proclaimed the island chain the independent Conch Republic. And naturally, a flag for the new republic was created and raised.

This past April, we commemorated the 37th anniversary of the secession during the annual Conch Republic Independence Celebration. Each year, the 10-day event includes the Great Sea Battle in Key West Harbor, with the republic’s “military forces” battling the enemy federales. The revelry also includes parties and gatherings, a wacky “drag race” (hint: high heels are mandatory), and a parade billed as the world’s longest. You can always expect to spot some salty sea dogs, seafaring pirates and their wenches out and about carousing along with the landlubbers.

Speaking of marine activities … want to know more about the Vandenberg and diving and snorkeling opportunities in the Keys and Key West? Just click here.

Savor Suspense in Key West with ‘Most Wanted’ Mystery Writers