Pete Kostelnick, an ultramarathon runner who lives near Cleveland, began his incredible journey July 31, 2018, at Anchor Point on Alaska’s Kenai Peninsula — the westernmost end of the North American highway system. 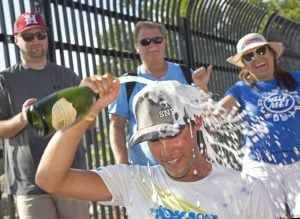 A jubilant Pete pours celebratory champagne on his head after finishing his awe-inspiring run from Alaska. (All photos by Carol Tedesco, Florida Keys News Bureau)

Given that starting point, it was only fitting that he celebrated the end of his run at the Key West marker that delineates the southernmost spot in the continental United States.

“Today was the final day and I made it, and it’s been the adventure of a lifetime,” said a jubilant Pete shortly after reaching the Southernmost Point, where he was greeted by cheers and applause from well-wishers gathered to welcome him.

Upon arriving, he sprinkled a tiny vial of Pacific Ocean water — water he had collected on the first day of his epic trek — into the Atlantic Ocean at the Southernmost Point. The symbolic and deeply moving gesture connected the two oceans, just as Pete’s run had done.

Then, sitting on the seawall next to the Southernmost Point, grinning and exuberant in the warm Key West sun, he popped the cork on a bottle of champagne. Surrounded by cheering spectators including his wife Nikki, he took a satisfying swig before pouring the rest of the bottle’s contents over his head.

One of Pete’s goals was to become the first person to complete a self-supported run, without relying on any kind of accompanying support vehicle, from Alaska to Florida. 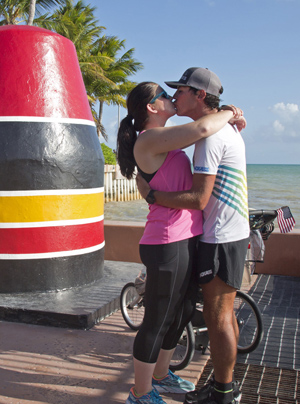 Nikki Kostelnick, left, kisses her husband Pete at the Southernmost Point at the end of his epic run from Alaska’s Kenai Peninsula.

Pushing his supplies in a three-wheeled jogging stroller, he averaged 55 miles per day on a diagonal route through parts of Alaska, Canada and the United States. The stroller, which he named in part after legendary aviatrix Amelia Earhart, contained spare clothing, a tent, electronic gear, and food in a bear-proof container that was necessary in the Alaskan wilderness.

Pete admitted facing a number of challenges during the run — including smoke from Canadian wildfires and flat tires on his stroller — but said he met wonderful people, reveled in awe-inspiring scenery, and always managed to push through the negatives to stay focused on his objective.

As well as commemorating his love of running, he said he hoped his latest journey would provide a lifetime of memories and inspire others follow their dreams.

“I call it ‘Ke2Key’ — Kenai to Key West — unlocking my wildest dreams,” Pete explained. “I think if the dream doesn’t scare you, then it’s not worth chasing after.”

Perhaps inevitably, some people along the way compared him to the fictional character Forrest Gump, who ran cross-country several times during the famed 1994 film of the same name.

“I get a lot of Forrest Gump comparisons and that’s all right — there could be worse people to be compared to,” Pete said with a smile as he stood beside the Southernmost Point.

Then, following a tradition embraced by almost all visitors to Key West, he posed for a photograph with his wife in front of the iconic monument.