One of Key West’s most talented residents is Gary Marion (aka “Sushi”), who entertains nightly on the second floor of the popular LGBTQ hangout 801 Bourbon Bar with the “Sushi and the 801 Girls” show. 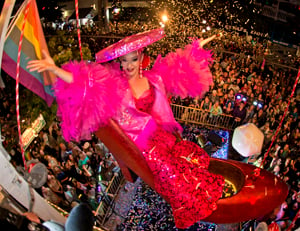 Perched in her high-heeled “chariot,” as midnight approaches she’s lowered from the balcony of the Bourbon St. Pub/New Orleans House Complex, reaching the ground as the clock strikes 12.

So what is one of Key West’s favorite divas really like? Read on!

Keys Voices: When did you become a Key West resident — and why?

Sushi: I came to Key West from Portland, Oregon, in 1994 for a fresh start with a new lover. Of course I’d heard of the rich LGBTQ history of Key West, and all the famous gays that had made it their home or vacation spot.

From the moment I arrived, it was an instant love story. I was head over heels, literally. There was then, as there is today, a fabulous, quirky local scene of artists and eccentrics that are welcoming and supportive.

Back then, there existed a tight-knit drag community, but there was no established drag cabaret. I saw an opportunity — a place for me to spread my wings and make a life and home. 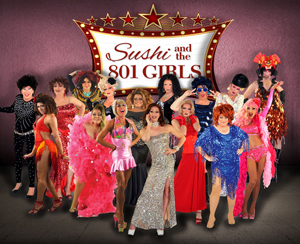 Sushi stands surrounded by the 801 girls in a vintage image of the troupe. (Photo courtesy of 801 Bourbon Bar)

KV: When did your career as a drag queen begin? Or do you prefer to be called a female impersonator?

S: I started doing drag in junior high school; it was a natural offshoot of my personality from early on. I’m not a female impersonator, as I don’t do celebrity or impersonation drag. I’m an old-school drag queen.

“Sushi” is a fashion statement meant to entertain an audience and myself. My style has always been a mix of the high and low, couture and trash, the chic and the rude, the fabulous and the weird. And I try never to take myself too seriously.

S: It’s the only show in town, sweetie. Drag shows nightly at 9 and 11 o’clock seven nights a week — which would not exist without the support and generosity of the 801’s Jim Gilleran, who has given me and the girls free reign to explore and express the art of drag entertainment.

KV: How long have you played the role of mentor and Mom for the 801 Girls?

S: I took on the role of house queen in 1996 and have played an active role in the lives of the girls from the beginning. Some queens come to me quite young and need a lot of support and guidance both in the club and in their personal lives. Others have taught me as much as I have passed on to them. Drag is a very demanding career and we all become family.

KV: What do you think makes Key West a premier destination for LGBTQ travelers? 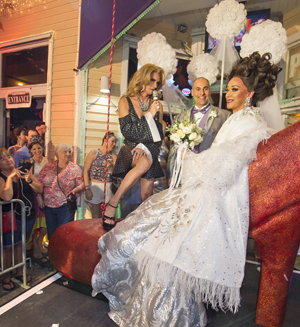 S: The LGBTQ community has always been drawn to Key West’s historic charm and friendly local life. We are a small town with an international appeal.

KV: How long have you performed the “Red Shoe Drop” for Key West’s New Year’s Eve celebration, and what are some of the most memorable moments?

S: I’ve been dropping in the shoe for 21 years thanks to Joey Schroeder, who has done an incredible job hosting the event at Bourbon St. Pub from the start.

One memorable moment was the turn of the new millennium. As I was descending in the shoe, there were firework displays on both sides of Duval, there was a massive crowd below me filling up the entire street, the whole sky was lit, and I had the most spectacular view of the island. I really felt the love that is here. It’s a memory I’ll never forget.

KV: Besides being an exceptional performer, what are your other talents?

S: I design all my New Year’s and profile event costumes from scratch, but I also have a large collection of rare vintage and collectible pieces from many eras and cultures that I’m always referencing for inspiration.

I’m told I have talent in the kitchen. I spent a year training at my uncle’s high-end restaurant in Tokyo as a sous chef, and today I still very much enjoy cooking Japanese and Asian dishes for my husband Jeff and our circle of friends.

Another surprising talent is a natural instinct about engines. I can usually fix the problem in under 20 minutes, and this usually surprises friends. The message: never underestimate a drag queen.