‘Over the Rainbow’ in Key West

If you’ve ever shared Dorothy Gale’s longing to stroll “somewhere over the rainbow,” you don’t have to channel the cast of “The Wizard of Oz” or travel to the elusive Land of Oz to do it. Actually, all you need to do is take a trip to Key West.

That’s because, on May 28, the City of Key West installed four permanent rainbow crosswalks at the intersection of Duval and Petronia streets — and people have been walking happily “over the rainbow” ever since.

The crosswalks span all four corners of the intersection and feature wide bands of all six colors of the rainbow flag, an internationally recognized symbol of gay and lesbian unity. And their location, appropriately enough, is in the heart of Key West’s LGBT entertainment district.

“Key West is very happy to be putting in the first thermoplastic permanent rainbow crosswalks in the state of Florida,” said Mayor Craig Cates, who stopped to watch city workers installing the colorful crosswalks. “It means so much to Key West to show our diversity, and also it goes perfectly with our One Human Family motto.”

Spearheaded by the city and the Key West Business Guild, the rainbow crosswalks are composed of pre-formed thermoplastic color blocks alternating with white stripes. Workers from the city’s Community Services Department carefully laid the blocks on the street, patiently trimming the corners by hand so they would fit properly without any overlap. 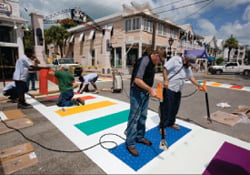 The four crosswalks were carefully installed and heat-treated by hand to ensure their quality.

To make sure the rainbows — and their message — would remain vibrant and welcoming for many years, the blocks were then heat-treated with propane torches (again by hand) to affix the colors permanently on the pavement.

Passersby watching the creation of the crosswalks could see, by the care the workers took, how important it was to them to make the iconic rainbows look just right.

Of course, the rainbow crosswalks are only the latest manifestation of Key West’s longstanding embrace of diversity. “One Human Family” was adopted as the city’s official philosophy in 2000, proclaiming equality and acceptance for everyone, and the island is internationally known as a leading LGBT vacation destination.

And most who witnessed it can still recall the magic day in 2003 when Gilbert Baker, creator of the original rainbow flag, supervised the unfurling of a 1.25-mile rainbow flag — believed to be the world’s longest — that he had sewn in the island city. 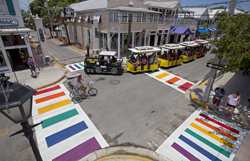 A Conch Tour Train turns at Duval and Petronia streets, giving passengers a ride “over the rainbow.”

Supported by approximately 2,000 volunteers of widely varying ages, ethnicities and sexual orientations, the magnificent banner was spread out to stretch the entire length of legendary Duval Street from the Gulf of Mexico to the Atlantic Ocean in a sea-to-sea showing of openness and pride.

“Accepting diversity has been going on for generations in Key West, mainly starting back when Key West was an island with no access but boats,” said Mayor Cates. “Everybody learned to live together, accept one another, so that has continued on through generations and is very evident today.”

While the rainbow crosswalks opened to traffic May 28, their official dedication is scheduled Saturday, June 13, as a highlight of the June 10-14 Key West Pride festivities. Don’t miss the chance to be part of it — and, like Dorothy in “The Wizard of Oz,” take your turn to walk “over the rainbow.”