It’s not called the silver king for nothing. There is simply no other acrobatic fish on the inshore fishing scene more coveted by anglers than the tarpon. 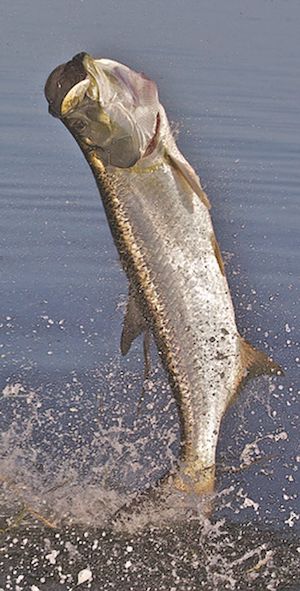 Known for their high-leaping ability, tarpon are powerful and tenacious. It’s sometimes easy to get them to bite a bait, but often they have lockjaw and can frustrate anglers and captains alike.

I had caught and released a number of tarpon, but those achievements always came under the tutelage of a professional Florida Keys fishing guide.

I wanted to do it myself.

So late one Friday afternoon, I armed myself with the necessary fishing gear — including two conventional reels spooled with 25-pound test line, two new Key Largo graphite rods, 80-pound test leader and a few 7/0 Owner hooks. I purchased a few live crabs and took off from Islamorada with my wife in our 14-foot Panga with a 40hp Yamaha outboard motor.

(It should be noted that I did tap the expertise of several guides at Bud ‘N’ Mary’s Fishing Marina in the Upper Keys. Hey, local knowledge is always important.)

Maria and I motored to a location close to Lignumvitae Key on the bay side of the Florida Keys Overseas Highway in Islamorada. Just as we arrived on location, a huge tarpon, weighing at least 140 pounds, leaped in front of the boat.

“Did you see that?” I screamed to my wife.

She had missed it, but it was a good omen. We set the anchor and floated our lines back behind the boat, and it didn’t take long to get that first bite.

First, it was just a slight twitch of the rod tip. Then a more pronounced movement. I looked at it, thinking something just wasn’t right and perhaps some seaweed had gotten entangled in the line. But seconds later, the rod doubled over and the reel began screaming as line stripped from the reel.

This was no seaweed.

I remembered previous instructions and held the rod up and started reeling. You never, ever, want to jerk the rod back to try to set the hook in a tarpon. Just keep a bend in the rod and, if the tarpon jumps, simply bow to the fish while it’s in the air to loosen up the pressure.

I tried to hand the rod off to my wife because she had never caught a tarpon before. 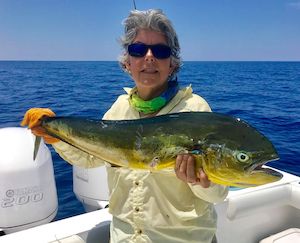 “No, you need to catch this fish,” she said.

With Maria driving the boat, we took off to get some line back, because the tarpon was headed to the open ocean.

The fish jumped a half-dozen times, shaking with those big silver scales glistening in the setting sun like hundreds of tiny mirrors. Every time it came out of the water, we reacted with a scream or an “Oh, my God!”

We chased that fish trying to get the leader to the boat because, in order to score an official release, the angler or the captain needs to touch the leader. We came close at least a half-dozen times, but my wife just couldn’t reach out far enough to tap the leader.

The fish took us into shallow water, then into deep water around navigation aids and around stone crab trap buoys. I thought for sure we were going to lose it, but about 40 minutes later Maria was able to touch the leader and hold it long enough for me to grab it and break it close to the hook.

We estimated the fish’s weight at about 80 to 100 pounds. It swam away, none the worse for wear (most hooks left in fish eventually corrode away), and we were ecstatic. 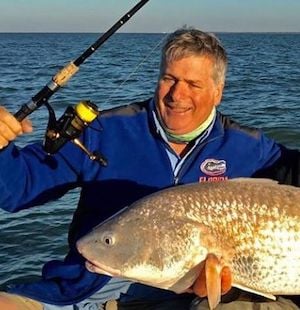 Although the sun had set, we figured we should give it one more try. We went back to our location and put out the crabs again.

Unbelievably, five minutes later we were on again to another tarpon.

This time I insisted that Maria take the rod. This was a different fish and, incredibly, I was able to touch the leader after a 10-minute fight.

We had officially released two tarpon for the evening, she got her first, and we were elated.

I reported the news the next morning to my professional guide friends.

“So can I book you for a tarpon trip tonight?” my friend Richard asked with a grin.

I politely declined, laughing at the thought, even though I knew Richard was kidding. After all, I’m an amateur when compared to the pros in the Keys who have years of experience under their belts.

Besides, I would have never been able to catch my tarpon without the previous experience of fishing with a pro — and without “local knowledge.”

Rainbow Crosswalks Return to the Streets of Key West