By Carol Shaughnessy|2019-12-04T13:36:19-05:00December 4, 2019|
One of the Florida Keys’ oldest private homes, the Curry-Freeman mansion dates back to the mid 1860s and is among the gems on display during the Old Island Restoration Foundation’s December tours.

In late 1840s Key West, John Bartlum wanted a home for himself and his family. A master shipbuilder, he had a perfectly good house on Green Turtle Cay in the Bahamas. In fact, after thinking it over, Bartlum decided there was only one practical thing to do: disassemble his Bahamas house, float it aboard ship to Key West, and reassemble it there. 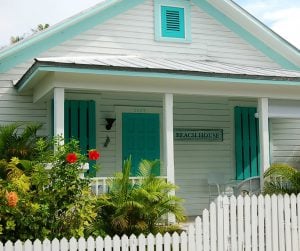 This quaint cottage in Key West’s Bahama Village district, more than a century old, was showcased during a previous season of home tours. (Photo courtesy of the Old Island Restoration Foundation)

That may sound peculiar, but it made so much sense to Bartlum’s fellow shipbuilder, Richard Roberts, that he too decided to float his Bahamas home to Key West.

Today the Bartlum and Roberts homes, successfully reassembled and located at 703 Eaton St. and 408 William St., are the only ones known to have been shipped to the island city.

Unique as they are, they certainly aren’t the only architectural treasures in Key West. In fact, the island’s historic district — believed to be the largest predominantly wooden one in the entire United States — includes almost 3,000 structures.

Take a leisurely stroll through this Old Town area, and you’ll realize how many influences contributed to its fascinating (and sometimes startling) blend of architectural styles. You’ll spot elegant two-story homes with wraparound verandahs rubbing shoulders with tiny, flower-decked cottages — or a tumbledown structural hodgepodge next to a restored Victorian gem.

Many houses are painted in tropical pastels or adorned with the wooden lacework known as gingerbread, and some have small openings called scuttles in their roofs for improved air circulation. White picket fences provide a finishing touch almost too picturesque to look real. 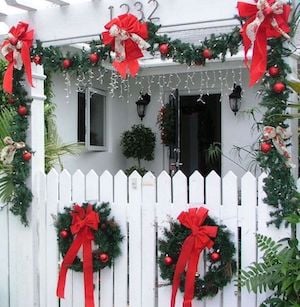 Homes featured on the Old Island Restoration Foundation’s December tours each year are festively decorated for the holidays.

A good number of these Old Town homes date from the 19th century, and reflect the building styles and cultures of the early settlers: Bahamian shipwreck salvagers, New England sea captains and Cuban cigar barons.

Some were built by the shipbuilder-carpenters of the 1800s, who turned their skills in crafting sloops and schooners to land-based projects. Now known as Conch houses, they most often had two stories with wraparound verandahs and shuttered doors and windows.

Others date from the greatest building surge in Key West’s early history, when thousands of Cuban cigar-industry workers migrated to the island following their country’s Ten Years’ War. As well as constructing large factories, Cuban cigar barons bought blocks of property where they put up cottages for their workers.

These single-story cigarmakers’ cottages are sometimes called shotgun houses and most had a side hall with three rooms, one behind the other. Why the name? Because if someone fired a shot through the front door, the bullet would emerge cleanly out the back door.

In the last quarter of the 19th century, cigarmaking and sea-based industries made Key West a very wealthy city. The prevailing Queen Anne architecture reflected this wealth with its rambling elegance, towers and turrets, balconies and porches. 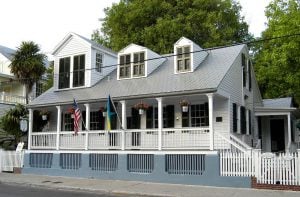 Rich exterior trim and decoration, like the delicate wooden gingerbread cutout work found in porch and stair banisters and brackets, is typical of Key West’s late Victorian-era homes. Some homeowners even chose gingerbread patterns that had special personal meaning — like the bar and gambling hall owner whose banisters were patterned with cutout whiskey bottles and card motifs!

Community members realized the value of their architectural heritage in the 1960s, after several historic dwellings were torn down to make way for modern development. The Old Island Restoration Foundation (OIRF) was established in 1960 to promote the restoration and preservation of Key West’s historically significant buildings.

On Friday and Saturday, Dec. 27-28, you can explore homes reflecting the island’s intriguing heritage — plus more recent dwellings that showcase the Florida Keys lifestyle — during holiday home tours presented by the OIRF and set for 3-7 p.m. both evenings.

But if you can’t make it to Key West in December, don’t worry. The OIRF also offers tours Jan. 17-18, Feb. 14-15 and March 13-14. (Now in their 60th year, FYI, they’re among the longest running in the U.S.) For times and tickets, just visit keywesthometours.com — and prepare to discover why Key West’s individualistic architecture is one of its most colorful treasures.