It Was a Dark and Stormy Night

Light from a corner streetlight gleamed sullenly on rain-slick village streets. Behind the French doors leading into a typical English parlor, the guests huddled together uneasily. They had expected a pleasant evening’s entertainment, but this was something more. In the next room, a murder had been committed — and the suspects were among them at this very minute. With no constable on duty, it was clearly up to them to solve the dastardly crime. 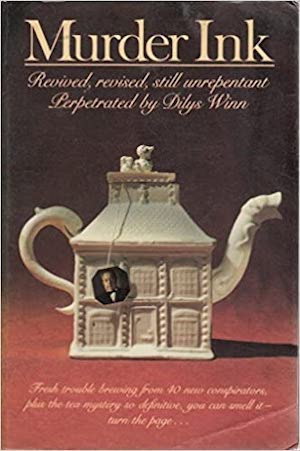 If you think scenarios like that happen only in mystery books, you’re (ahem!) dead wrong. In fact, years ago they happened regularly (though generally without rain) in a Key West emporium improbably named Miss Marbles’ Parlour.

These days, Key West is well known as a haven for mystery writers. Current or past residents Tom Corcoran, Michael Haskins, Roberta Isleib (whose pen name is Lucy Burdette) and their creative cohorts produce terrific mysteries set on the island.

Their books (deservedly!) enthrall readers with the quirky crimes of a fictional Key West. And the southernmost city’s mysterious reputation is celebrated most years in June during the entertaining Mystery Fest Key West.

But few are aware that, in the mid-1990s, the island was home to a world-class mystery bookstore.

Located just off Duval Street, Miss Marbles Parlour was the only bookstore in South Florida devoted entirely to mysteries. Named in an offbeat tribute to Agatha Christie’s fictional spinster sleuth, Miss Marple, it was also the setting for interactive “murder evenings” three nights a week.

Most people who wandered into the store, whether for books or the mystery events, quickly realized that proprietress Dilys Winn had an unparalleled knowledge of her stock. And well she might — because years earlier she had opened Murder Ink, the world’s first mystery bookstore, in New York City.

I remember Dilys, a former advertising copywriter, as a bright, funny woman who sometimes adopted a dithery manner reminiscent of Christie’s Miss Marple.

Not long after she fled the advertising world to open Murder Ink, the store became a runaway success. Dilys also arranged the first-ever mystery weekend and produced “Murder Ink,” a New York Times best-selling collection of pieces by the genre’s leading lights, and two follow-up books (one boasting a scratch-n-sniff clue — bitter almonds, of course).

Her activities quickly spawned a score of imitators. By the time she relocated to Key West for family reasons, there were about 60 mystery bookstores in the U.S. But I suspect none of them had the offbeat charm of Miss Marbles’ Parlour, the southernmost such emporium in the continental United States. 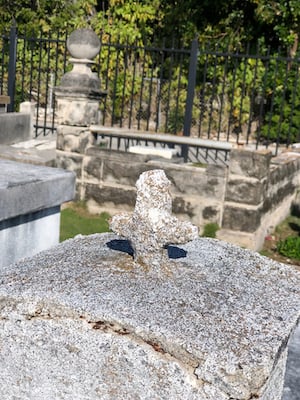 Dilys was intrigued by Key West’s historic cemetery during her years on the island. (Photo by Carol Tedesco)

Since I’m a mystery addict, it didn’t take me long to wander into Dilys’ domain. Its main room was intimate and welcoming, with bookshelves lining the walls — filled with volumes by classic and contemporary mystery writers like Joan Hess, Agatha Christie, Rex Stout and Sara Paretsky.

Scattered about the room were cheerfully unmatched tables and chairs. A fascinating nook contained a ramshackle church pew, patchwork pillows, vintage tapestry knitting bags, chests from India and Morocco, and a gigantic brass lamp with an opulent feather shade.

Chatting comfortably with Dilys (as nearly every customer wound up doing), you’d never know she was a legendary figure in the mystery world. As well as suggesting books that matched each reader’s interests, she enjoyed talking about the island that had become her home.

“What I like about Key West is that it’s not Floridian — it’s Caribbean,” she told me once. “I love going to Blue Heaven for breakfast. I sit out at a table with roosters pecking at my feet, and I write.

“I am also quite taken with the cemetery,” she added, her professional instincts rising to the fore.

But when I walk past a certain address just off Duval, I still recall the mystery events when local actors depicted suspects, an eerie murder room contained clues, audience members competed to find out “whodunit” — and despite Key West’s balmy evenings and blazing sunsets, it was always “a dark and stormy night.”