Teams of women and girls from around the world will unite in Key West for adrenaline-charged sports matches and associated activities Jan. 21-27, during the 29th annual Kelly McGillis Classic International Women’s & Girls’ Flag Football Championship. 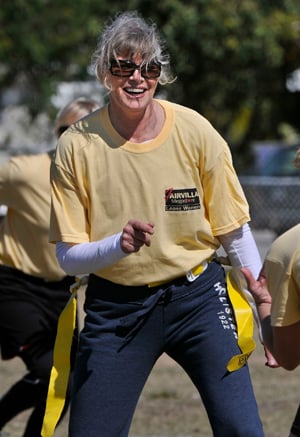 The championship is named for and endorsed by the Golden Globe-winning actress, director, and former Key West resident who starred in “Top Gun” and “Witness” — and it includes pre- and post-tournament team-building activities and three days of challenging competition.

More than two dozen teams from across the United States, Mexico, Central America, Sweden, India, and Egypt are on this year’s geographically diverse roster. The tournament attracts players ranging from 9 years old to seniors who compete in multiple divisions, develop their skills during flag football clinics, and enjoy camaraderie during dances, contests, pool parties, and other social events.

Let me tell you, that group really knows how to have a good time — on and off the playing field.

I spoke recently with Diane Beruldsen, president and founder of the International Women’s Flag Football Association that presents the tournament, and asked her what was new and exciting for the event this year.

“We will have a very special guest joining us for this year’s event,” Diane reported. “Dr. Jen Welter, who made history in 2015 when she was hired as a linebacker coach for the National Football League’s Arizona Cardinals, becoming the first female to hold a coaching position in the NFL.”

Following three days of clinics and islandwide festivities for players, the tournament’s opening ceremony will be from 4 to 6 p.m. Thursday, Jan. 23, at the Half Shell Raw Bar, 231 Margaret St. (which, BTW, has amazing happy hour specials). The teams will be given a warm Key West welcome by the island city’s mayor, Teri Johnston, and other dignitaries and representatives from international countries.

A perennial favorite, Kelly’s Players Parade, is scheduled just after the ceremony and will showcase tournament teams proceeding along Key West’s renowned Duval Street and seaport area. Players wear team uniforms or costumes and display their country or state flags or team banners in the lively procession, which also includes floats and marching bands (it wouldn’t be a true Key West event without a parade, of course!). 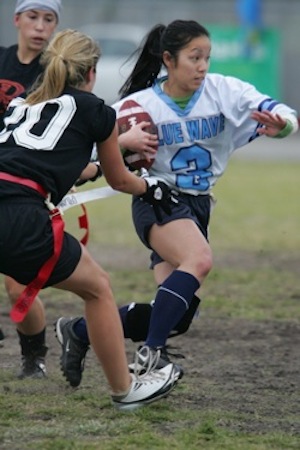 Teams of women and girls from the U.S. and many other countries are scheduled to participate in the 2020 tournament.

The official registration party follows from 8 p.m. until 11 p.m. at the Bourbon Street Pub, a locals’ favorite spot located at 724 Duval St.

Then “let the games begin” at 10 a.m. Friday and 8 a.m. Saturday and Sunday at Wicker Field Sports Complex on Kennedy Drive. The competition culminates on Sunday in playoffs and the World Challenge Game with the USA all-stars battling the international all-stars.

Awards will be presented Sunday night at the historic Turtle Kraals Restaurant & Bar, 231 Margaret St. Be sure to stop by and congratulate the winners and maybe have a libation and a light nosh.

The week also includes the third International Women’s Flag Football Conference Monday, Jan. 27, with guest speakers and an international board. Designed for female players and coaches, the conference will feature discussions about the sport by panelists from six countries. One of the special guest speakers will be Jamie Saffa, founder and executive director of the Jimmy Foundation Sport Academy for Girls in Sierra Leone, West Africa.

And if you’re like me (and spent a little too much money on holiday cheer this season), you’ll be happy to hear that viewing of all games and activities — including clinics on how to play and officiate flag football — is open to the public free of charge.