How Low (Key) Can You Go

(This week, “Keys Voices” presents insights into Key West’s appeal by guest blogger Reagan Fountain, a third-year public relations major at the University of Florida with an inextinguishable passion for writing, traveling and discovering things about new places.) 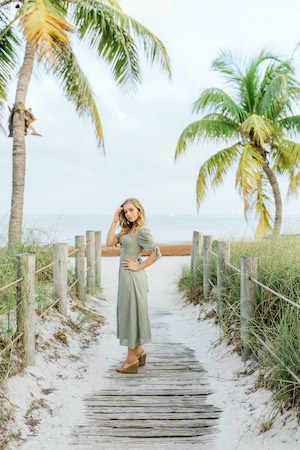 When it comes to traveling, different places are known by character traits specific to that place. For example, people with an affinity for immersing themselves in nature might enjoy gliding through the Everglades on an airboat. Self-proclaimed history fanatics may be interested in visiting Washington DC to see the White House or the Lincoln Memorial.

When I travel, the ideal destination for me is Key West — one that’s teeming with nature, rich in history and consumes me in its culture.

Key West has become a prime destination for ecotourists due to its natural landscape and all the wildlife that resides there. Key West and the Florida Keys are home to the only living coral barrier reef in the continental United States — and what better way to escape everyday life than by submerging yourself in another world entirely?

One of the most incredible experiences of my life took place at Looe Key Reef, a part of the Florida Keys National Marine Sanctuary located in crystal-clear waters about 25 miles from Key West. It’s a great place for new and experienced divers alike.

As I descended down to the calm ocean floor, the world above faded away and time ticked a little slower. I saw moray eels, Goliath groupers, reef sharks, nurse sharks, stingrays, pufferfish, sea turtles, hogfish, barracudas, parrot fish and dozens of other tropical species of sea life.

All were extremely friendly, because the reef is protected. Not only weren’t they startled by me, but a hawksbill sea turtle actually let me touch it (no doubt hoping its interaction with humans would sway us to swap our plastic straws for reusable ones next time we’re sipping on frozen cocktails from a local bar). 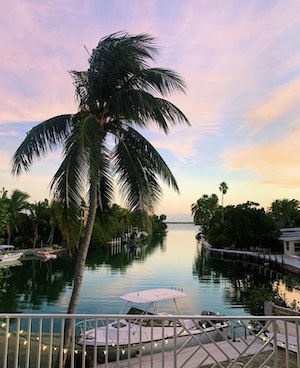 Among the most appealing attributes of Key West and the Florida Keys is the natural beauty of the land, sea and sky. (Photo by Reagan Fountain)

While I wouldn’t mind joining the cast of “Finding Nemo” down there, Key West still has so much to offer back on the surface.

The island is decorated with mangrove mazes and scattered with wild chickens whose all-too-recognizable crow sounds like someone yodeling “cock-a-doodle-doo” into a train whistle.

It’s a place where the landscape is completely flat aside from the stilted houses, which were built to avoid floods during hurricane season. It’s a place where snowbirds come to bask in the never-ending sun, and those who aren’t used to Florida’s relentless humidity develop beads of sweat on their faces when they step outside.

Those who are familiar with Florida’s toasty charm are happy to be near the ocean, where the sea breeze tickles your face. The salty mist helps you to forget about the reddish-purple sunburn acquired when you underestimated the strength of the sun’s rays against a single, sloppily applied layer of SPF 50.

While half of Key West’s tourists are lured by the weather and natural ecosystems, the other half are tempted to travel there for a completely different reason: history and culture. Regardless of race, gender, sexual orientation or economic standing, anyone who visits the island is welcomed with open arms and a smile.

For this reason, ONE HUMAN FAMILY became the official motto of the modern Key West community. This motto exemplifies the vibrant LGBTQ+ community that is prevalent on the island. Gay bars, drag queens and rainbow crosswalks are among some of the things you’ll encounter as you walk down Duval, the most traveled street in Key West. 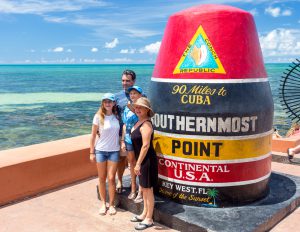 A family poses for a photograph at the Southernmost Point marker in Key West — which commemorates the southernmost spot of land in the continental United States.  (Photo by Laurence Norah, Florida Keys News Bureau)

Not only is world-famous Duval the island’s party epicenter, but it’s also known as “the longest street in the world” because it runs all the way from the Gulf of Mexico to the Atlantic Ocean. It’s lined with boutiques, pubs, outdoor restaurants, art galleries, attractions and bars (locals use the phrase “Duval Crawl” to describe bar hopping).

But there are many other famous landmarks to visit in Key West. They include the Ernest Hemingway house, the Southernmost Point, Fort Zachary Taylor, the Mel Fisher Maritime Museum and the Harry S. Truman Little White House.

No matter what kind of traveler (or person) you are, visiting Key West is an experience that leaves you feeling full of life, yet light as air. The abundance of culture and historical landmarks, ethereal beauty of the landscape and surrounding blue cauldron of tropical fish, and the congenial nature of the friendly and fun-loving locals is a combination that’s sure to keep you coming back.

And when you’re sprawled on a sun chair sipping a mango margarita from Southernmost Beach Cafe, make sure to dig your toes in the sand a little deeper, savor that sip for a little longer, laugh at your friend’s corny joke a little harder, and (most importantly) lather that sunscreen on a little thicker.