Fishing in the Florida Keys, by George

George Poveromo, a South Florida native and lifelong angler,  is editor-at-large for “Salt Water Sportsman” magazine, producer and host of the nationally televised “George Poveromo’s World of Saltwater Fishing” and host/producer of the highly acclaimed Salt Water Sportsman National Seminar Series. This week, he’s our guest blogger — so read on for his expert advice on Florida Keys angling. 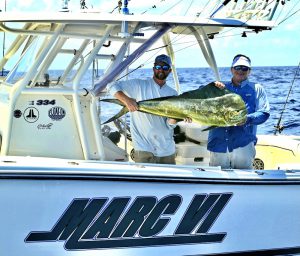 George (at right) and a fellow angler celebrate a dolphin catch off Islamorada.

Normally I promptly answer fishing-related questions from viewers of my television series and readers of “Salt Water Sportsman,” especially those regarding the Keys. Yet there’s one I struggle with: “What’s your favorite type of fishing in the Florida Keys?”

My fishing exploits have deep roots throughout the Keys, beginning at age 6 when my father began taking me to the island chain with his boat. He had a weekend house in Key Largo during my late teens through mid-20s. And for two decades or more, I’ve fished the entire Keys at least a dozen times annually.

My challenge in answering the question is the same reason the Keys are my favorite fishing destination: variety. Where else can you have a wealth of offshore pelagics to target — many close to shore — incredible bottom and wreck action, world-class flats fishing and exciting backcountry adventures?

I’m an offshore angler at heart, yet still can’t pinpoint my favorite type of Keys fishing. So instead I’ll list my favorite species and the best caught in each region.

KEY LARGO. The mutton snapper is the mascot fish for Key Largo. The local reefs and wrecks, especially off northern Key Largo, host consistent fishing for muttons. The patch reefs offer excellent shallow-water fishing for them, as do the deeper reefs and wrecks. If you know how to fish for muttons and have a decent northbound current, it’s hard to come back without dinner. 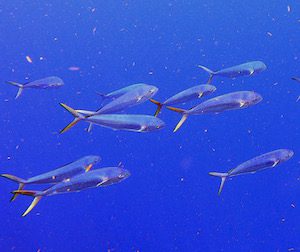 Dolphin fish make their way through the Keys’ clear water.

Right on the tails (pun intended) of the muttons, in my opinion, are dolphin (mahi-mahi). Given the deep offshore bottom contours off Key Largo and their interactions with the Gulf Stream, some of the best and most consistent dolphin fishing off the entire Florida Keys materializes here. It’s one of my all-time favorite areas to fish for them, be it schoolies or large bulls exceeding 30 and 40 pounds.

Honorable mention must be given to the maze of creeks and backcountry waters around Key Largo proper. The biggest snook in all the Keys thrive here. Tarpon action is consistent at times and the ever-present jack crevalle is always eager to bend a rod.

ISLAMORADA. From my perspective, the “Sportfishing Capital of the World” moniker is appropriately coined for Islamorada’s broadbill swordfish. Few places off the continental United States have a swordfishery as consistent as that off Islamorada. Targeted respectfully (meaning no electric reels), swordfish represent the pinnacle of big-game sportfishing.

The fabled humps off Islamorada also get my vote for superb action with blackfin tunas. Trolling and flutter-jigging produce mostly small- to medium-size tunas, whereas live-chumming with pilchards and deep-drifting live pinfish or fresh squid score trophy-class fish exceeding 20 and even 30 pounds.

MARATHON. For me, Marathon is a two-punch combination: yellowtail snapper and dolphin. Some of the most consistent fishing for flag yellowtails is here. Typical of yellowtailing throughout the Florida Keys, chumming heavily (over 100 pounds per outing) gets the fish up. 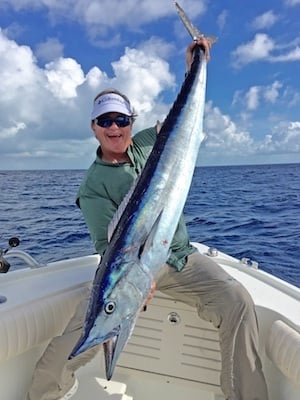 George Poveromo displays a big wahoo he caught off Key West, an area he says offers the most diverse fishing opportunities in the Keys.

Consistently catching them, however, requires 12-pound and even 10-pound fluorocarbon leaders, No. 1 J-hooks or 1/0 in-line circle hooks and tough tiny slivers of bait that keep on the hook well; I prefer bonito. These snappers can be so solid, I’ve fooled them on top-water plugs after live-chumming them into a frenzy with pilchards.

Marathon is a very consistent destination for dolphin, as the flowing Gulf Stream often cuts close to the coast here. What’s more, with only the Lower Keys and Key West ahead of Marathon, dolphin haven’t been heavily pressured.

LOWER FLORIDA KEYS. This is a trolling area for me, be it alongside rips, color changes, weedlines or over deep contours like Floyd’s Wall. There’s no telling what might enter your bait spread out here, from dolphin to blue marlin. These are also “quieter” trolling waters, as a lot of attention here remains on the reefs, nearshore channels and flats, and the gulfside wrecks that hold cobia, permit, mangrove snappers, huge ’cudas and goliath groupers.

KEY WEST. Arguably, Key West offers the most diverse fishing opportunities in the Keys. The Gulf of Mexico rockpiles in the 30- to 50-foot range and just north of the Marquesas lend fast action with groupers and snappers. Though mostly undersize, there are enough quality fish. I’ve taken muttons as large as 15 pounds and grouper (gags) as heavy as 20 pounds on these rocks. What’s more, the rods are always bending.

Another favorite Key West fishery of mine exists offshore, particularly along Wood’s Wall and the related fissures and crevasses. It’s about 20 miles due south of Key West. Here I’ve caught big dolphin, three yellowfin tunas in one day ranging from 110 to 116 pounds, blue marlin and my largest white marlin to date — a 65-pounder.

I’ve always said the most difficult thing about fishing in the Florida Keys is deciding what to fish for. That’s why I can’t name a single type of fishing that’s my favorite. Therefore, if you’re a fan of my television series or an ardent reader of “Salt Water Sportsman,” please go easy with that question!