By Greg Tromba|2022-06-15T15:17:51-04:00June 15, 2022|
Remote Dry Tortugas National Park, made up of tiny coral-and-sand islands, lies 70 miles west of Key West. Accessible to the public only by boat or seaplane, it’s home to rare migratory birds and a wealth of marine life. The park’s awe-inspiring centerpiece is the Civil War–era Fort Jefferson. (Photo by Laurence Norah, Florida Keys News Bureau)

Do you think you’ve seen the best the Florida Keys have to offer? Are you looking for some new open-air natural experiences in the island chain? Here are three of my faves that might pique your interest and help you discover even more about our fascinating history and land-and-water environment. 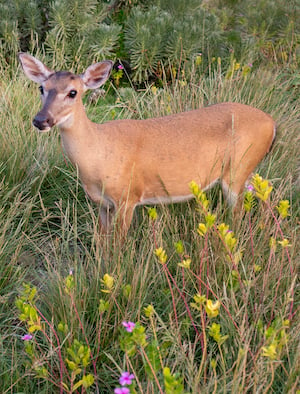 The park’s centerpiece is the awe-inspiring Fort Jefferson — one of the largest masonry structures in the entire Western Hemisphere. Construction on it began in 1846, and the massive fort served as a Union military prison for captured deserters and others. Its most famous prisoner was Dr. Samuel Mudd, who was convicted of conspiracy in President Abraham Lincoln’s 1865 assassination (but later pardoned).

After exploring Fort Jefferson (the panoramic view of sea and sky from the top level is absolutely breathtaking), take the time to enjoy some of the incredible snorkeling the park offers. The unspoiled natural site is alive with colorful marine life and rare migratory birds — and being there is truly an experience like no other.

TWO: Observe the flora and fauna at the National Key Deer Refuge. Established in 1957, the refuge protects and preserves habitats for wildlife, including some of the Florida Keys’ most engaging creatures — tiny Key deer. The nature preserve stretches more than 9,200 acres, with lands on Big Pine Key and other islands of the Lower Keys, plus backcountry land and water areas. The amazingly diverse environment includes mangrove forests, freshwater and salt marsh wetlands, pine rockland forests and tropical hardwood hammocks.

The miniature deer are about the size of a large dog and are often seen grazing around Big Pine Key. (FYI, it’s illegal to approach or feed them, even though you might be very tempted.) The refuge is also home to more than 20 other endangered and threatened plant and animal species. 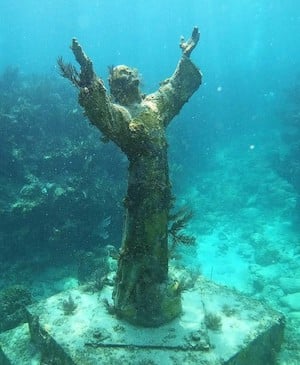 The iconic Christ of the Deep statue is one of Key Largo’s most unforgettable dive sites. (Photo by Michael Oliver)

I recommend starting your exploration at the Florida Keys National Wildlife Refuges Nature Center, located on Big Pine near mile marker 30.5. It’s open Wednesday through Friday from 10 a.m. to 3 p.m., and the staff can offer you a treasure trove of information about the conservation area and all its inhabitants.

If you’re a diver, don’t miss an exploration of the Key Largo Dry Rocks, where you’ll find the 9-foot-tall bronze Christ of the Deep statue resting in 25 feet of water. During its 57 years beneath the sea, the majestic figure has become one of the most photographed sub-sea sites in the world.

And do check out Pennekamp’s visitor center — the gateway to the park at mile marker 102.5 on the Florida Keys Overseas Highway. Attractions include a 30,000-gallon saltwater aquarium, exhibits and nature videos.

As well as these intriguing natural areas, you’ll find many other attractions in the Florida Keys & Key West. For a preview sure to trigger the “travel gene,” just click here.