Pie Eaters in the ‘Limelight’ July 4 in Key West

By Carol Shaughnessy|2022-06-15T12:31:42-04:00June 15, 2022|
Contestants in Key West’s 2021 Key Lime Pie Eating Championship gobble their pies — without using their hands, according to contest rules. The quirky “consumption competition,” the highlight of the annual Key Lime Festival, has become a July 4 tradition in the Florida Keys. (Photo by Rob O’Neal, Florida Keys News Bureau)

It’s likely to get messy in Key West on the Fourth of July. At least, it will for everyone who plans to step into the “limelight” and participate in the annual Key Lime Pie Eating Championship. 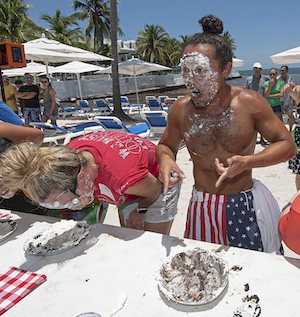 That’s right — Nathan’s Famous Hot Dog Eating Contest in New York is not the only big-time July 4 event for competitive eaters. In fact, up to 25 contestants with an appetite for the Florida Keys’ signature dessert will vie for top honors in the Key West challenge.

The pie-eating extravaganza, the highlight of the annual Key Lime Festival that runs from June 30 through July 4, will take place beside the Atlantic Ocean at the Southernmost Beach Café. Lime lovers can start arriving at 12:30 p.m. and the contest is set to begin around 1:30 p.m. — and it involves a whole lot of whipped cream.

Just ask Seattle resident Nicholas Luera, who won the 2021 consumption competition by devouring an entire whipped-cream-topped pie — without using his hands, per contest rules — in just 2 minutes and 13.5 seconds.

His strategy included competing shirtless and plunging face-first into the pie, emerging with whipped cream coating his cheeks, nose and eyelashes.

“I honestly can’t explain it,” Luera said of his victory. “My brain went dark for a little bit and I was just facing the pie, mouth open all the time.”

Competitors in the quirky event are each tasked with gobbling a full 9-inch pie faster than their rivals — and though they can wear safety goggles to keep whipped cream out of their eyes, they’re absolutely forbidden to use their hands. 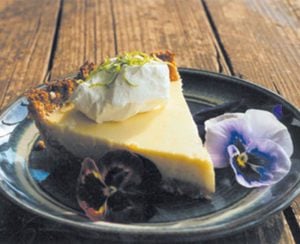 Entrants in past years’ contests have tried strategies like tipping over the pie pan and licking up its contents. But in 2021, no one could top Luera’s pie-eating prowess.

“In New York they’ve got the hot dog contest, and that’s great and all, but in Key West, we’ve got the real contest,” he said. “It’s a speed-eating round, face first, all one and done — Key lime pie. ”

Believed to have originated in Key West in the late 1800s, Key lime pie was designated Florida’s official pie in 2006 by the state legislature. Its main ingredients are condensed milk, egg yolks and the juice of tiny yellow Key limes. The creamy filling is typically nestled in a graham cracker crust and crowned with either whipped cream or meringue.

The concoction is so popular, in fact, that few people visit the Florida Keys without sampling at least one slice.

What else goes on during the Key Lime Festival? Events begin at 6:30 p.m. June 30 with a cookbook signing and champagne reception featuring author and festival co-founder David Sloan, who penned the fantastic “Key West Key Lime Pie Cookbook.” It’s all happening at the Curry Mansion Inn, a lavish property whose kitchen is renowned as the pie’s historic birthplace. 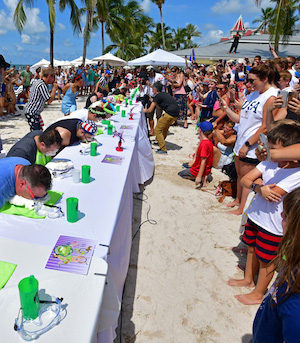 On July 2, the quirky “can’t-miss” Key Lime Pie Drop scheduled from 11 a.m. to 2 p.m. After crafting contraptions designed to protect miniature pies, contestants must drop their creations from atop the Key West Lighthouse — without damaging the pie.

Naturally that’s nearly impossible, but the attempts are guaranteed to be hilarious.

The festival also features many more events, including a Key lime cocktail tasting stroll, mouthwatering Key lime dinner experiences, and the annual Key Lime Pie Hop that takes foodies on a stroll to sample five variations of the famed dessert.

No matter how much fun those are, however, they can’t beat the July 4 battle for pie-eating supremacy.

And while most people regard July 4 as an occasion for parades, picnics, barbecues, fireworks and traditional American apple pie, Nicholas Luera advises making a sweet substitution for the latter.