Traveling the Highway that Goes to Sea

FLORIDA KEYS — The road unrolls like a long gray ribbon, with vast vistas of turquoise water and paler blue sky stretching endlessly on either side. Driving down the Florida Keys Overseas Highway, the southernmost leg of U.S. Highway 1, it’s easy to understand why this roadway is sometimes called the Highway that Goes to Sea — and a “bucket list” drive that everyone should experience at least once.

When you leave mainland Florida, the highway stretches for more than 100 miles through the entire Florida Keys island chain. On your left side, the Atlantic Ocean drifts to a far horizon; on your right lies Florida Bay and, farther south, the Gulf of Mexico.

Traveling the highway from the mainland to Key West you’ll cross an astonishing 42 bridges that leapfrog across the water from key to key in a series of giant arches of concrete and steel. From the top of some of the larger spans, particularly in the Upper Keys, the individual islands look tiny and fragile against the sea and sky.

Yet despite that, these islands support lively, picturesque communities. The highway winds past Upper Keys marinas housing sport-fishing fleets and sailing yachts, oceanfront villas surrounded by palms and flowering plants, enticing seafood restaurants and resorts ranging from upscale to funky. Passing miles are denoted by small green “mile marker” signs on the road’s shoulder or median.

Just southwest of Marathon, a family-friendly community known for its environmental attractions, lies the undisputed jewel of the Overseas Highway — the Seven Mile Bridge, which stretches a stunning 6.79 miles across open water.

Contemporary though the highway seems, it actually follows a trail blazed in 1912 when Standard Oil millionaire Henry Flagler completed the Florida Keys Over-Sea Railroad from mainland Florida to Key West.

But after 23 years of carrying freight and eager vacationers, much of the railroad was badly damaged in a 1935 hurricane. Three years later the Overseas Highway debuted, built on a foundation that incorporated some of the railway spans, marking the start of an incredible adventure for motorists.

In 1982, 37 original bridges including the Seven Mile Bridge were replaced with wider ones. Approximately a third of the old bridges were removed during the replacement project, while three of those remaining — the Long Key, Bahia Honda and Seven Mile bridges — are listed in the U.S. National Register of Historic Places.

Driving down the Overseas Highway, you’ll see many of the old bridges alongside the newer ones. Some have become popular fishing piers, inhabited by patient anglers awaiting action at the end of their lines.

Part of the Old Seven Mile Bridge, an iconic landmark that runs parallel to the new bridge, is being carefully restored. Nestled beneath the old bridge, whose center span was removed to allow boat traffic, lies the tiny island of Pigeon Key — once a base camp for workers constructing the original bridge and now a historic site with a beautifully curated railroad museum.

Eventually the Lower Keys segue into Key West, where the highway ends amid 19th-century charm and modern-day attractions. The ambiance of continental America’s southernmost city — located closer to Cuba than Miami — is embedded in its narrow palm-shaded streets and century-old mansions decorated with the wooden scrollwork called gingerbread.

Today, you can leave the Florida mainland and travel the entire length of the Overseas Highway, through all the Florida Keys to Key West, in less than four hours. But instead, try driving at a more leisurely pace — stopping at tempting seafood restaurants and roadside galleries, following inviting side roads and taking pleasure in the ever-changing land- and seascapes to be viewed from the Highway that Goes to Sea. 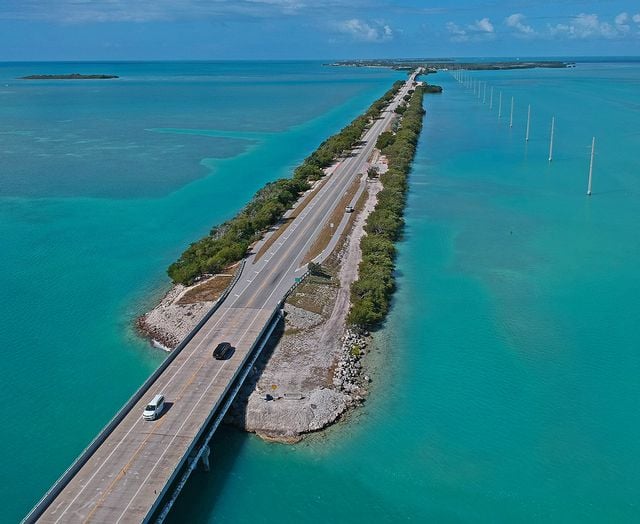 Driving south along the Overseas Highway, on your left side, the Atlantic Ocean drifts to a far horizon; on your right lies Florida Bay and, farther south, the Gulf of Mexico. 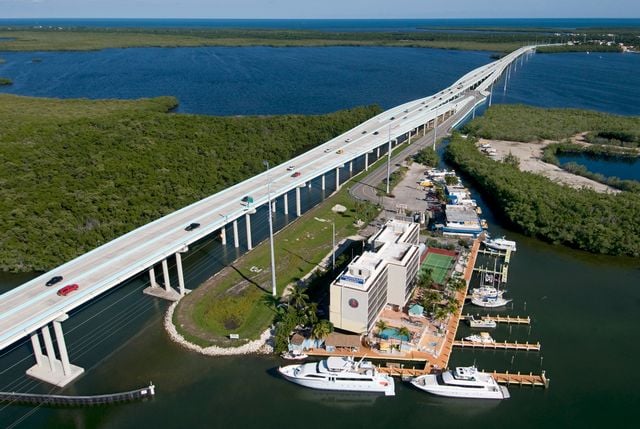 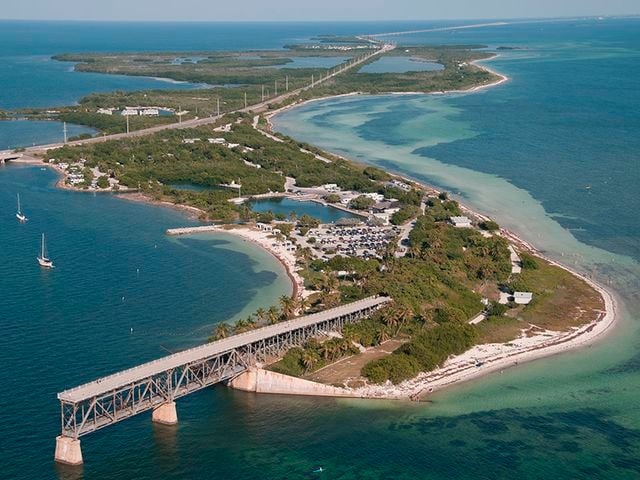 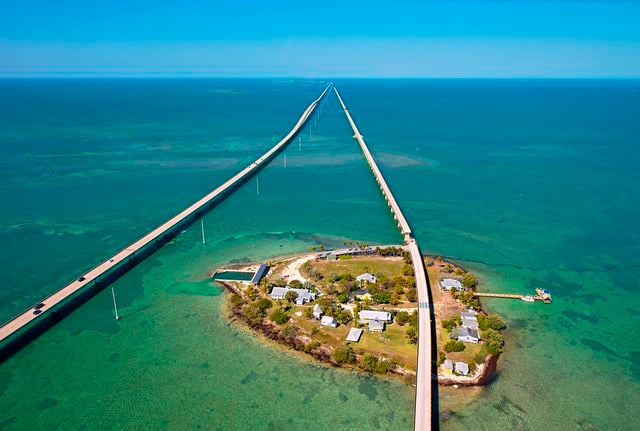 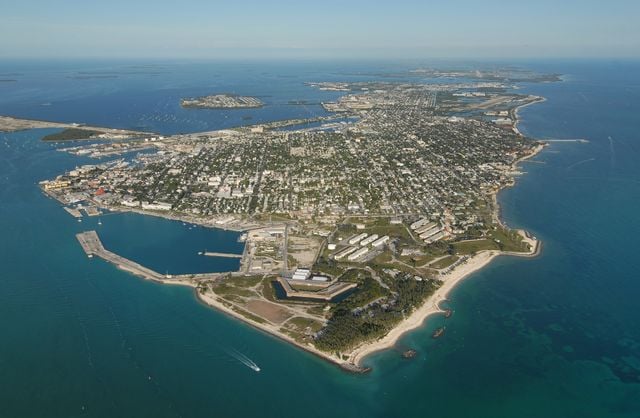 Aerial view of Key West, the southernmost island along the Overseas Highway.