Escape to the Keys’ Beaches to Banish Pre-Winter Blahs

Now that winter weather is getting ready to chill much of the U.S., I’ve been reflecting (okay, maybe “gloating” is a more accurate word) about one of the reasons I love being a Key West resident.

That’s the fact that, while my northern friends are digging out their winter coats and wondering where they stashed their snow boots, the Florida Keys’ balmy year-round temperatures mean I can put on shorts and flipflops and head for the beach.

Taylor stayed in Key West frequently during her years with Richard Burton — whose mentor and adoptive father, Shakespearean scholar and playwright Philip Burton, numbered among the island’s famous residents.

Fort Zachary Taylor Historic State Park is spread out over 54 acres. Its marvelous beach is a great place to swim and snorkel in the crystal-clear waters. Plus, the park provides everything you might need for a perfect day at the beach: picnic tables, grills, nature trails and even some shade for non-sun-worshipping visitors, thanks to the site’s majestic Australian pines.

FYI, while Key West doesn’t have any specific “gay beaches” per se, it’s almost inevitable that, wherever you choose to swim and sun, you’ll encounter warm and welcoming smiles from members of our “One Human Family.” 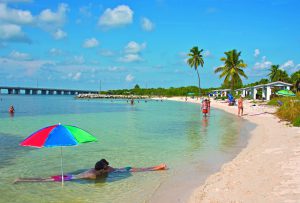 The beach area at Bahia Honda State Park, repeatedly rated among the best in the US, is one of the Florida Keys’ most serenity-inducing spots. (Photo by Rob O’Neal, Florida Keys News Bureau)

Another Florida Keys state park, Bahia Honda, is known for its beautiful beaches and is also a popular snorkeling destination for visitors and locals. In fact, the park’s beaches have been listed among the best in the U.S. by several travel surveys.

The 524-acre state park is located in the Lower Keys between mile markers 36 and 37 on Bahia Honda Key.

The journey from Key West usually takes only about 45 minutes, and it makes for a gorgeous half- or full-day trip for visitors to the southernmost city.

One of my all-time favorite excursions in the Florida Keys is to Dry Tortugas National Park, which has some of the prettiest beaches I’ve ever seen.

The park spans 100 square miles in the Gulf of Mexico and consists of seven mini coral-and-sand islands lying 68 miles west of Key West. And there’s seriously great snorkeling among the park’s awe-inspiring, vibrant corals and seagrass.

One of America’s most remote national parks, the pristine Dry Tortugas is only accessible to the public by boat or a seaplane. Both methods of getting there offer breathtaking scenery. 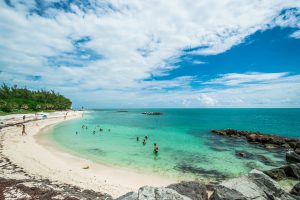 If you have limited time in the Keys, the seaplane (which departs from Key West International Airport) is a good choice. The flying time is approximately 40 minutes each way.

The high-speed catamaran ferry takes about 2.25 hours each way and passengers travel past the Marquesas Islands and Boca Grande, with the chance to spot turtles and sea life.

Dry Tortugas National Park’s historically rich centerpiece is the massive Fort Jefferson, which was used as a Union military prison for captured deserters during the Civil War. A complimentary guided tour is available to visitors.

In fact, instead of dreading the snow and ice that will blanket your vicinity all too soon, consider making plans to escape to balmy Key West. Because in Key West and the Keys, the only ice is in the cocktails — and you’ll be sure to find a favorite beach that beckons you back again and again.