By Carol Shaughnessy|2021-07-14T15:41:22-04:00July 14, 2021|
Literary and cultural events recalling Ernest Hemingway, who lived in Key West for most of the 1930s, are among the highlights of the Hemingway Days celebration held each July. In this photo taken in 1953, the legendary author writes at his safari camp desk in Africa. (Photo courtesy of the Ernest Hemingway Photographs Collection; John F. Kennedy Presidential Library and Museum, Boston)

… Perhaps I should call you Papa, since that’s the persona you created down here in Key West, but I admire your work so much that it seems too presumptuous.

You may think it odd that I’m writing you this letter, since you’re presumably now typing on that great battered Royal in the sky (I can’t, somehow, believe you’ve graduated to a laptop or iPad like so many of your literary legatees). 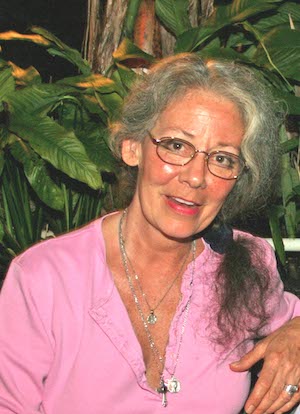 Lorian Hemingway coordinates her namesake short story competition each year in conjunction with Hemingway Days. The winner will be announced July 21 during the Key West Poetry Guild’s evening readings. (Photo by Tom Oosterhoudt)

The fact is, though, I’ve spotted you in Key West once or twice since you departed this life for pleasanter “islands in the stream” — outside Sloppy Joe’s, and on Whitehead Street near your house (you were staring bemusedly at the long line of visitors waiting to get in).

So I know that, on occasion, you escape the celestial realm and return to the place where you lived and raised (excuse the reference) a little hell during the 1930s. And that’s why I’m alerting you about something you might want to slip away for.

You’re probably aware that Key West has changed since your day, but you might not be aware that you’re regarded as its literary patron saint. In fact, some 40 years ago, a fellow named Michael Whalton created a festival here honoring your work and lifestyle. Hemingway Days, it’s called, and this year it takes place July 20-25.

(FYI, it attracts a lot of people who look surprisingly like you and hang out mostly at Sloppy Joe’s …)

Anyway, one of the most anticipated events during this July’s Hemingway Days is the announcement of the winner of the Lorian Hemingway Short Story Competition. (If you actually DO use a laptop or an iPad, check it out online at shortstorycompetition.com.)

Your granddaughter Lorian is critically acclaimed for authoring three fine books (look for her memoir “Walk on Water” in that great bookstore in the sky), though her writing is more lyrical than your spare-to-the-bone style. 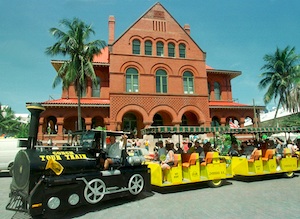 Lorian shares your love of Key West, and her short story contest offers cash awards — useful whether you have or have not — and recognition to emerging writers. And it’s so popular that it typically gets 1,000-plus entries every year from all over the world.

This year’s contest winner will be announced during an event set for 6:30 p.m. Wednesday, July 21 (yes, your 122nd birthday) at the Key West Library. By the way, in one of those coincidences that make real life stranger than fiction, your first love Agnes von Kurowsky actually moved to Key West and worked at the library after you left the island.

The announcement is paired with the Key West Poetry Guild members’ reading of your poems and their own work — which you should find interesting, since poetry helped launch the career that made you a legend. The guild is a longstanding literary presence in Key West, and some of its members have become quite renowned.

The evening will also include the first public reading of the short story competition’s winning entry. And though Agnes is long gone, you might enjoy wandering around the library — its local history department is particularly fascinating. 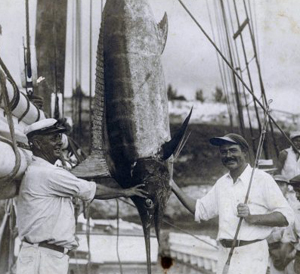 Ernest Hemingway (right) was a passionate angler during his Key West years, as Dr. Ashley Oliphant will discuss during her virtual presentation. (Photo courtesy of the Key West Art & Historical Society)

Of course, the readings and announcement are certainly not Hemingway Days’ only cultural events. For example, there’s a virtual presentation by author and scholar Dr. Ashley Oliphant titled “Key West to Bimini: Hemingway’s Big-Game Fishing Evolution.” (Remember your passion for marlin fishing in the Gulf Stream?)

And you’ll probably want to tag along on the twilight walking tour of some of your favorite Key West spots, led by Dr. Oliphant and artist/writer Beth Yarbrough.

Plus two Hemingway “museum days” are scheduled at the Custom House Museum, showcasing a lot of the items you left behind when you departed Key West in late 1939.

But honestly, Mr. Hemingway, if you can’t get your head out of the clouds, don’t fret about missing these events (or even Hemingway Days itself). I’ll tell you a secret: most attendees will believe you’re there in spirit anyway.

With admiration,
A Fan