By Carol Shaughnessy|2021-01-20T18:55:24-05:00January 20, 2021|
A cat sits on a writing table once used by Ernest Hemingway in the author’s studio at Key West’s Ernest Hemingway Home & Museum. Aspiring writers and literary fans now have the opportunity to spend private time in Ernest’s study and explore his former residence. Hemingway lived in Key West throughout most of the 1930s. (Photo by Rob O’Neal, Florida Keys News Bureau)

You’re sitting in Ernest Hemingway’s writing studio in Key West, a small second-story room with windows looking out over the clear blue waters of the writer’s own backyard swimming pool. A hunting trophy adorns one wall and a cat drowses contentedly on the floor, occasionally twitching its six-toed paws as it dreams of feline adventures. 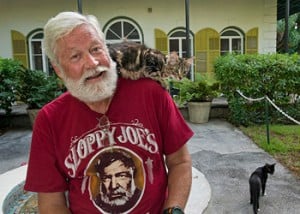 The small room seems full of lingering creativity. Not of ghosts, of course, because the spirit of Ernest Hemingway surely has more important things to do than peer over your shoulder as you gaze wonderingly around his book-lined study. But perhaps the ghost of some long-ago inspiration — some indefinable essence that helped spark his epic novels and short stories — still echoes, waiting for another writer to sense it.

And suddenly, you do sense it. It fills your soul, quickens your heartbeat and sends ideas tumbling over one another in your mind as they shape themselves into the bones of a story.

This scenario might sound improbable, but it’s not — because now Key West visitors can jump-start their creativity with a chance to write in Ernest Hemingway’s private studio.

Ever since the iconic author penned classics while living in 1930s Key West, the island has been a haven and an inspiration for writers. The Spanish colonial villa at 907 Whitehead St., where Ernest lived and worked for nearly a decade, has been open to the public since 1964 as a museum honoring the town’s most famous literary resident. 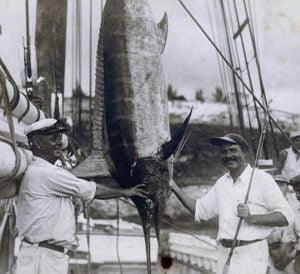 Recently, museum staff unveiled a never-before-offered after-hours experience that gives writers and literary buffs private time in the second-story writing studio beside the house — as well as full access to the home and gardens that sheltered the legendary American author.

During the experience, one person and a guest can enjoy three evening hours on the property — plus, thanks to a special introductory offer, a second consecutive evening at no extra charge.

If you book the one-of-a-kind offering, you’ll have the home, grounds (except the pool) and writing studio to yourself, providing a chance to court inspiration in the place where Hemingway wrote “For Whom the Bell Tolls,” “The Snows of Kilimanjaro” and other enduring works.

While you’re not allowed to use Hemingway’s battered typewriter — which still sits on an aging round table and could likely tell some stories itself — you can bring a laptop, tablet or old-fashioned pen and paper to record your thoughts. The writing studio is dimly lit at night, enhancing the feeling of creative solitude.

The exclusive experience can be booked Monday through Thursday evenings (except when the Hemingway grounds are reserved for a special event). Cost is $1,500 and includes a second consecutive evening while the introductory offer is in effect. 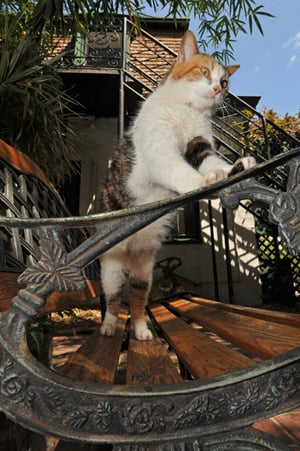 Each morning, Ernest Hemingway wrote in the studio (in background) behind his Spanish Colonial home in Key West. (Photo by Rob O’Neal, Florida Keys News Bureau)

As well as this unprecedented opportunity, two other Hemingway-themed offerings are now available to Key West visitors.

Across Whitehead Street from Ernest’s home, at the Lighthouse Hotel (a member of the new Kimpton Key West collection), private parties of up to 10 people can reserve the casually elegant Hemingway Suite for an exclusive dining experience in the spirit of the author.

Called “A Hemingway Affair,” it features a custom menu designed by Great Events Catering according to diners’ preferences, a cocktail hour with butler-passed hors d’oeuvres and a multicourse meal prepared by a private chef — all in the gracious suite that provides a view of the museum honoring Ernest.

The Lighthouse Hotel stands at 902 Whitehead St. Reservations are required for the culinary extravaganza, with pricing based on elements including menu choices and time of year. For more info, email megan.coccitto@kimptonkeywest.com.

Described as a historic journey around picturesque Old Town, the 3.5-hour tour enables participants to explore the island — and its cuisine and libations — through the legendary writer’s eyes. For details, visit keywestfoodtours.com.

By participating in one or more of these new Hemingway adventures, you can discover how the renowned American author was enriched by his years in Key West — and how his presence enriched the city as well. Credited with establishing Key West as a literary haven, Hemingway left a legacy that remains vibrant today.