A group of 15 young rescued sea turtles (one of them a tiny baby) was recently released in Gulf Stream waters off Key West by a dedicated duo from the Florida Keys-based Turtle Hospital — and they were assisted in this worthy endeavor by members of a powerboat racing team who were on the island to compete in the sport’s world championship. 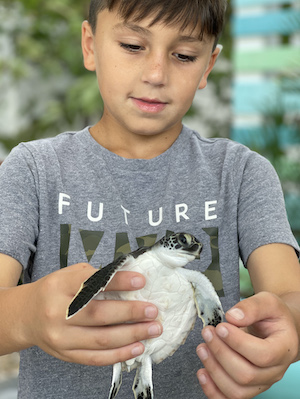 The little guy was found buried in about a foot of seaweed by a family cleaning up around a boat ramp after the storm — so 8-year-old Khannan Mellies and his family promptly named their unexpected “guest” Ian and reached out to the Turtle Hospital.

The Turtle Hospital’s manager, Bette Zirkelbach, reported that Ian and three other green sea turtles, three hawksbills and eight loggerheads were all released Nov. 12 into a sargassum weed line about 20 miles off Key West in the Gulf Stream. (Sargassum acts as camouflage for young turtles, so it’s an ideal habitat for their stage of life.)

According to Bette, Ian and most of his cohorts were “washbacks” — a term for turtles washed ashore from the Gulf Stream by a storm’s wind and water action. All were cared for at the Turtle Hospital after being found.

The turtles were carried to the release point by a fleet mate of the 39-foot TS Motorsports MTI powerboat that was competing in the 450R Factory Stock class in Race World Offshore’s 2022 Key West Offshore World Championship.

Helping with the release were Taylor Scism, driver of the boat during the championship series; her father Randy Scism, a veteran powerboat racer; Captain Jack Carlson; and Turtle Hospital founder and director Richie Moretti.

The world’s first veterinary facility of its kind, the Turtle Hospital has been rescuing, rehabilitating and returning turtles to the wild for over 30 years. It’s located in Marathon, at mile marker 48.5 on the Florida Keys Overseas Highway, and visiting it provides an inspiring example of environmental passion in action.

Daily educational tours introduce visitors to the resident sea turtles (some are recovering “patients,” and some are permanent inhabitants whose conditions make their release impossible), as well as the hospital’s healing programs for loggerhead, green, hawksbill and Kemp’s ridley turtles. 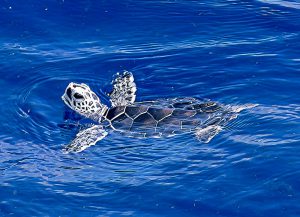 Ian swims about 20 miles off Key West in the Gulf Stream just after his release. (Photo by Ray Lee, Florida Keys News Bureau)

In addition to their curative efforts, founders and staff work tirelessly to raise public awareness about sea turtles and their needs, collaborate with state universities on sea turtle research, and work toward environmental legislation that makes the beaches and water safer and cleaner for their charges.

The longstanding relationship between the hospital and Florida Keys powerboat race organizers was built on a mutual desire to safeguard the sea turtles, manatees and dolphins that inhabit Keys waters. Before and during each race in the annual championship series, Richie and Bette scan the racecourse from a helicopter to spot any marine wildlife that might be on or near it.

But despite that impressive victory, the biggest “winners” during the team’s Key West sojourn were clearly Ian and his fellow turtles — who are beginning a new life in the Gulf Stream, thanks to the good-hearted racers and the dedicated group from the Turtle Hospital.