On May 18, 1991, Queen Elizabeth II paid a visit to the Florida Keys. Thirty-one years later, as the world mourns the British monarch’s death, it seems only fitting to recall that day — and Her Majesty’s encounter with the unofficial queen of the island chain. 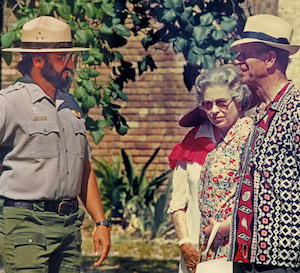 They traveled aboard the magnificent Royal Yacht Britannia, making the Tortugas a brief stopover on the way to New Orleans after spending several days in Miami. As is typical of the laid-back Keys, the pomp and circumstance at Fort Jefferson was significantly more low-key than it was in Miami.

Queen Elizabeth and her party arrived via tenders from the Britannia, which had anchored just off Fort Jefferson. On Garden Key, the Tortugas’ largest island and home of the massive Civil War-era fort, she was greeted by the Keys’ “queen”: Wilhelmina Harvey, the first woman mayor of the island chain’s Monroe County, a beloved 79-year-old grande dame.

And I was there to witness and photograph the historic moment.

Wilhelmina, who was born in Key West (also known as the southernmost city in the continental U.S.), was renowned for her candid charm. She made the 70-mile trip to the Tortugas via helicopter — the first time, she admitted, that she had ever flown in one. 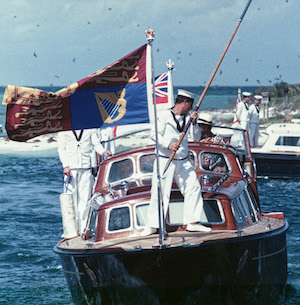 The royal couple traveled to and from Fort Jefferson in a tender from the Royal Yacht Britannia. (Photo by Andy Newman, Florida Keys News Bureau)

About an hour before Queen Elizabeth’s arrival, Wilhelmina and the small contingent of assembled media (including me) were given a rather strict briefing about how the royal couple must be greeted. We media types were absolutely forbidden to shout or ask the queen to turn one way or another for a better photo or video angle. And we couldn’t move an inch from our designated spots.

When the great the moment arrived, the tenders carrying the queen and her party tied up to the Fort Jefferson dock and the royal couple stepped ashore.

Wilhelmina was wearing a tropical white dress with a red shawl and a wide-brimmed hat to help fend off the subtropical sun. She welcomed Her Majesty to the Keys by presenting her with a conch shell — the traditional symbol of the island chain.

My goal was to get a picture of the two of them together with the shell so we could see both faces. But alas, the queen faced Wilhelmina during the entire presentation and never turned.

National Park Service ranger Matt Fagan spent about 45 minutes escorting Queen Elizabeth and Prince Philip around Fort Jefferson. He hit all the highlights including the fort’s distinction that, despite its massive size and role as a critical defense point in controlling access to the Gulf of Mexico, it had never been fired upon. 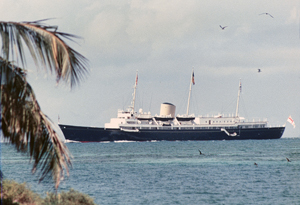 The royal party also saw the cell where an American physician was imprisoned for supposedly conspiring with John Wilkes Booth to assassinate U.S. President Abraham Lincoln in 1865. Four years afterward, Dr. Samuel Mudd was pardoned by President Andrew Johnson — but despite repeated efforts by Mudd’s descendants, his conviction was never expunged. His exact role in Lincoln’s murder, if any, is still officially unknown.

As Queen Elizabeth and Prince Philip made their way back to the tenders to return to the royal yacht, a group of campers gathered on the Fort Jefferson beach. They quietly gave the “royal wave” as the tenders departed for the Britannia.

As far as I know, the British monarch never publicly commented on her Florida Keys visit. But whenever I saw Wilhelmina, she stated that the opportunity to meet Queen Elizabeth was “one of the most beautiful things that ever happened in my life.”

Wilhelmina died in May 2005 at age 93, while Queen Elizabeth passed away Sept. 8, 2022, at age 96 — after a remarkable 70 years on the throne. And though both the British queen and the unofficial queen of the Florida Keys are gone, their meeting in the Dry Tortugas remains an unforgettable moment in Keys history.