‘Starstruck’ in the Lower Keys

For some people, “seeing stars” means spotting Will Smith on a Hollywood street or Taylor Swift at an Aspen ski lodge. But for some 650 amateur and professional astronomers from around the world, “stars” have a meaning that’s literally light years away from the realm of film and music celebrities — and the best place to see them is in the Lower Florida Keys. 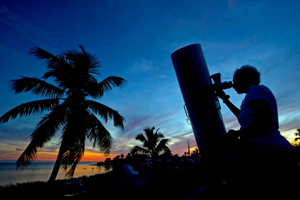 Tedda Howard focuses her massive telescope on Jupiter during a past Winter Star Party in the Lower Keys. (Photo by Rob O’Neal, Florida Keys News Bureau)

In fact, the Lower Keys are so well known as a stargazer’s paradise that, each year for more than 30 years, the tranquil region has been the site of an exclusive gathering called the Winter Star Party.

The event’s primary attraction for astronomers is the incredible number of southern constellations, comets, stars and other celestial objects that are visible from the Keys island chain — virtually the only place in the continental United States where they can be seen. The Lower Keys’ southern location, clear “steady” skies and relative absence of large-scale artificial lighting at night combine to create stunning viewing conditions.

Of course, it doesn’t hurt that the Keys’ subtropical winter temperatures mean star watchers can set up their telescopes and enjoy the deep-sky spectacle in comfortable “shirt-sleeve” weather — without needing heavy jackets or endless thermoses of hot coffee to stay toasty and motivated.

Each February (typically during the new moon), the warm weather and wide-open skies combine to entice scores of astronomers, astro-photographers, telescope makers and more to pack up their gear and head down the Florida Keys Overseas Highway to the Lower Keys.

This year, they’ll gather Feb. 17-23 at two scout camps on the aptly-named Scout Key for the 36th annual Winter Star Party — hosted, as always, by Miami’s Southern Cross Astronomical Society. Founded in 1922, the SCAS is one of the oldest amateur astronomical societies in the Western Hemisphere. Its mission is to improve the awareness, understanding and enjoyment of astronomy — and the Winter Star Party does just that.

But what do you DO at a Winter Star Party?

During the day, participants can attend lectures and presentations by nationally recognized astronomers and guest speakers, research and purchase astronomy equipment from on-site vendors, display their skills in photo contests, network with fellow astronomy aficionados, expand their knowledge in workshops, get updates on astro-imaging techniques, and exchange information and advice relating to their fascinating field. There are even special camp activities set up for young astronomers.

But no matter how intriguing the speakers’ presentations might be, the Star Party action really heats up when the sun goes down. That’s when the covers come off the expensive, highly prized telescopes — some of them so massive that it’s necessary to climb a ladder to gaze through their lenses — and the heavens come alive for those whose passion is viewing them.

When that happens, believe me, nobody’s thinking about Will or Taylor at all.