We have our fair share of celebrity sightings in the Florida Keys. However, in Key West, you can watch your favorite celebs performing on a regular basis. 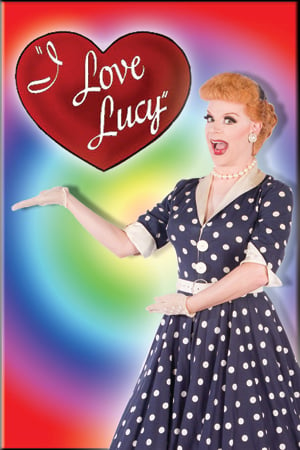 Well, maybe not the actual celebs — but thanks to an incredible female impersonator named Christopher Peterson, you can enjoy characterizations of dozens of your favorite celebrity icons including Joan Rivers, Bette Midler and Tina Turner. Christopher, who developed and stars in his one-man show, EYECONS, performs at the La Te Da Cabaret located at 1125 Duval St.

Christopher’s talented performances never involve lip-synching, and he flawlessly transforms from one character to another with the help of his “magic” side-stage closet and a plethora of wigs and gowns. His vocal range and comic timing are truly remarkable.

Born in New Brunswick, Canada, he started his theater career early in life when he began developing his female characterizations. His professional credits include playing a Lucille Ball character in the movie “Rat Race” and appearances in multiple award-winning theater and TV productions.

The EYECONS show is a must-see when visiting Key West — and with the ever-changing cast of characters, you never know which of your favorite icons may be taking center stage.

I recently sat down with Christopher to get the inside scoop on his lengthy entertainment career.

Keys Voices: What inspired you to become a female impersonator?

Christopher Peterson: I saw Jim Bailey on “The Carol Burnett Show” doing Barbra Streisand and I thought, “Oh, I want to be that.” Also, a queen by the name of Craig Russell in a 1975 movie titled “Outrageous.” He did multiple characters. Both these performers sang in their own voice [with] no lip-sync. But one of the biggest influences was Bugs Bunny, who could do drag in an instant, and Elmer Fudd didn’t realize it wasn’t a woman until an ear popped out — and his comic timing can’t be beat.

KV: What influenced you to make Key West your home? 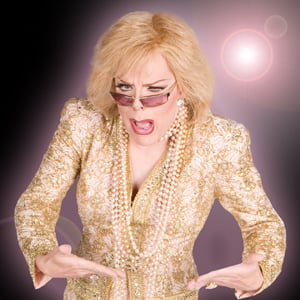 Christopher’s impersonation of Joan Rivers is classic — and he once actually interviewed her.

CP: In 2000 Mark Barauck, who was then the owner of La Te Da, built a showroom and made me an offer I couldn’t refuse: a five-season contract which turned into 17 years. Also, when I started working here in 1998, it felt like home. I grew up in communities where gay and straight mixed; after all Key West’s motto is “One Human Family.”

KV: Who are some of the icons you impersonate, and what motivated you to choose them?

CP: The ladies I impersonate are the cream of the crop in gay history: Marilyn, Carol, Reba, Patsy, Joan, Bette (both Midler and Davis), Tina, Barbra, Liza and Judy, Lucy, Cher, Gaga and a couple of others. Notice how all you have to say is their first name — no last names necessary? That’s how famous they are … they speak for themselves [and] they are the EYECONS of the last century and this one too.

KV: Have you ever met any of the icons that you impersonate?

CP: I have never met any of the ladies, but I did interview Joan Rivers by phone in the ’90s. The angle was Joan interviewing Joan, and she was hilarious and gracious.

KV: Which of your many successful roles on TV and stage stand out most for you?

CP: My impersonation of Lucy in the movie “Rat Race” in scenes with Cuba Gooding Jr. Marilyn Monroe in “Kung Fu: The Legend Continues” with David Carradine. Shannon in Brad Fraser’s hit play “Poor Superman” in Toronto in the ’90s; I won a Dora Award for best male [actor]; it’s like winning a Tony, only in Canada. 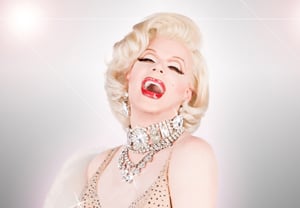 Christopher’s Marilyn Monroe captures the essence and sultriness of the legendary star.

KV: Your Eyecons show at the La Te Da Cabaret has been a huge hit for over a decade. What sets apart your Key West venue from others where you’ve performed?

CP: La Te Da is a state-of-the-art showroom; you won’t even find this kind of cabaret in New York or London. All the characters I do both visually and LIVE — no lip sync — and I never leave the stage. I change from one EYECON to another right in front of you.

KV: Do you have any advice for our readers?

CP: Don’t just sit there reading this; go to the website and book a ticket, then jump on a plane and have one of the best times of your life!

Recording a Legend: “A Mother’s Love” by Coffee Butler and Cliff Sawyer