Recording a Legend: “A Mother’s Love” by Coffee Butler and Cliff Sawyer

This week, Keys Voices presents the story behind the release of the incredible album “A Mother’s Love,” recorded by Key West musical icons Coffee Butler and Cliff Sawyer. The events are chronicled below by guest blogger Ralph De Palma, an acclaimed author and photographer who produced “A Mother’s Love.” 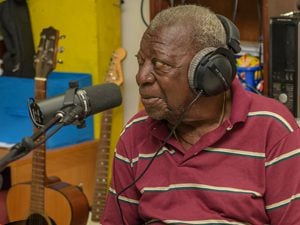 Coffee, shown here during a recording session, exhibits a passion for music that infuses every note of the new album. (All photos by Ralph De Palma)

After entertaining Key West for over five decades, legendary local entertainer Lofton “Coffee” Butler retired from music and entertaining in 2005. In 2014, I wanted to interview him for my new book, “The Soul of Key West, Volume II.”

I walked up the narrow pathway to the small Stock Island home. After greeting a middle-aged lady at the front door, I was introduced to a well-kept octogenarian with a bright gleaming smile that practically lit up the room.

Coffee was a little hesitant during the first interview. He had never heard of “The Soul of Key West, Volume I,” and he was naturally concerned about this stranger in his living room asking a lot of questions.

I brought a copy of my book as a gift. As he looked through it, he saw the bio and photos of his best friend Cliff Sawyer, and he smiled. I tried to put him at ease, so naturally we started talking about music. Music had consumed his life for over 60 years.

While interviewing Coffee for my book, we became friends. I returned to his home to follow up several additional times, and he later agreed to perform at the book release party that was scheduled for December 2015.

The show sold out well in advance and we had a waiting list for tickets. We included local talent and cousins Clayton and Mina Lopez, and Robert Albury along with Coffee’s best buddy Cliff Sawyer. We attracted a number of talented musicians that all wanted to perform with Coffee. 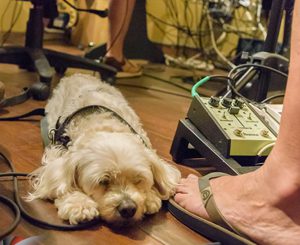 The sound was terrific, and the performance was well accepted by the audience. The concert was recorded and videoed, and there was no question that we would schedule another concert soon.

Coffee Butler is a Key West treasure. I had always hoped to record a new album of his music. Now, after three years of live performances, we have put together “A Mother’s Love,” an album of music from Coffee Butler and Cliff Sawyer. The album release party took place Nov. 25 at the Key West Theater, in celebration of Coffee’s 90th birthday two days before.

Since the first concert, Coffee Butler and Friends have performed four additional sell-out concerts at the Key West Theater. Local photographer Rob O’Neal commented that this group was a Key West version of the Buena Vista Social Club, referring to the 1997 Cuban phenomenon.

The comparison is strikingly apt. The manager of EGREM Studio in Havana, where the Buena Vista Social Club recorded their one and only album (that sold 13 million copies) explained that it was a fortuitous event that occurred after producer Ry Cooder had a cancellation of musicians coming to Havana to record.

Cooder then put together this band of older local Havana-based Latin jazz vocalists and musicians that had a body of unpublished work, and the talented group came together for the once-in-a-lifetime recording session. No one was trying to be the front man; they were all working as a perfect ensemble. The album became a worldwide sensation. 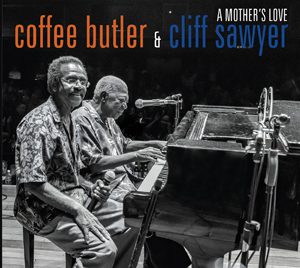 “A Mother’s Love” is a once-in-a-lifetime gathering of Key West talent, with all the musicians bringing their “A” game to the project in salute to Coffee.

As we recorded Coffee and Cliff’s album, award-winning producer Ian Shaw got every ounce of talent out of all the musicians and vocalists. It was clear they all brought their “A” game to the studio. Everyone contributed 100 percent. They all wanted to be a part of this epic music project.

It was a perfect storm of musical talent coming together for a singular goal — much like the Buena Vista Social Club musicians in Havana. Hopefully this album will be a similar Key West phenomenon.