With its funky charm, quirky characters, end-of-the-road mindset and reputation as a bastion of the bizarre, Key West might seem more like a fictional setting than a real locale. And many authors, from Ernest Hemingway to Heather Graham, have used the island as the locale for memorable books.

Hemingway look-alikes flock to Key West each July during a festival that celebrates the late author, who lived and wrote on the island during the 1930s. (Photo by Andy Newman, Florida Keys News Bureau)

Of course, as those of us lucky enough to live in Key West can attest, the continental United States’ southernmost city is real enough. But it definitely proves the old proverb that reality can be stranger than fiction (which may explain, at least partially, why residents and visitors find it so appealing).

Want some examples? No problem.

ONE: Key West (and the rest of the Florida Keys) make up an “island nation” called the Conch Republic. In 1982, the Keys symbolically seceded from the United States to protest a U.S. Border Patrol blockade that virtually stopped traffic on the only road in and out. After proclaiming the islands the independent Conch Republic, intrepid founders declared war on the mother country, pelted a U.S. Navy representative with stale Cuban bread, surrendered 60 seconds later and demanded $1 billion in foreign aid. (FYI, it still hasn’t arrived.)

TWO: Key West is closer to Havana (90 miles) than Miami (159 miles). In 1978, after a challenge from a local reporter, then-mayor Sonny McCoy traveled that 90-mile distance to Havana on a single slalom ski. The grueling feat took six hours and 10 minutes, with complications including six-foot seas and an escort from Cuban gunboats.

THREE: The Key West Cemetery, a small, sunny and oddly comforting spot in the center of picturesque Old Town, includes gravestones reading “I Told You I Was Sick” and “Devoted Fan of Singer Julio Iglesias.” They’re not far from the Otto family plot, where a tiny Key deer lies buried with its devoted owners — and three of the family’s pet dogs.

FOUR: For the best Cuban sandwich in Key West, head for the laundromat. Really. One of the top purveyors of the traditional sandwich, a luscious concoction of ham, cheese and spiced pork pressed between slices of Cuban bread, is Sandy’s Cafe at the M&M Laundry on White Street. 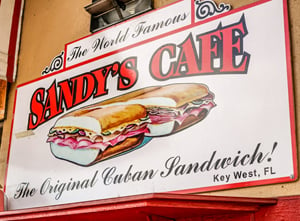 For a world-class Cuban sandwich, head for Sandy’s Cafe at the M&M Laundry in Key West. (Photo courtesy of Sandy’s Cafe)

FIVE: Each July, some 125 stocky, white-bearded middle-aged men arrive in Key West to take part in a unique ritual. No, it’s not a convention of vacationing Santas — it’s the Hemingway® Look-Alike Contest at Sloppy Joe’s Bar, a frequent hangout of the literary legend. Hemingway lived and wrote in Key West throughout the 1930s and set “To Have and Have Not,” his only novel with a U.S. location, on the island he loved.

SIX: In 2004, the City of Key West had an official chicken catcher on its payroll. Third-generation island resident Armando Parra, a barber and bird buff, was hired to trap some of the island’s free-range poultry population for relocation. However, the position was short-lived because, apparently, too many chickens crossed the road to avoid him. Today the renegade roosters and hens are flourishing — and providing abundant photo ops for fascinated visitors.

Of course, these are just a few of Key West’s “stranger-than-fiction” realities. To discover others … well, there’s no better way than coming down on a personal fact-finding mission. One warning, however: many of today’s happy residents evolved from yesterday’s visitors who simply refused to leave.