It covers only five acres of land, and seemingly houses little more than a sleepy cluster of buildings and vegetation. But when it comes to Pigeon Key, appearances are deceiving. Surrounded by turquoise water beneath the Old Seven Mile Bridge at Marathon, the tiny island looms large in the history of the Florida Keys. 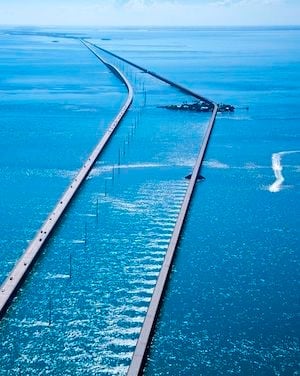 “Old Seven,” at right, carried vehicular traffic after the  Florida Keys Overseas Highway replaced the railroad. The newer bridge beside it  took over that function in 1982. (Photo by Rob O’Neal, Florida Keys News Bureau)

And now, following the restoration and reopening of a 2.2-mile section of the bridge nicknamed “Old Seven,” Pigeon Key is more accessible than ever.

The island made its indelible mark on history thanks to a seemingly impossible project envisioned by wealthy railroad baron Henry Flagler.

When Flagler built the Florida Keys Over-Sea Railroad in the early 1900s — forever changing the face of the Keys by connecting the formerly isolated islands to each other and mainland Florida — the biggest challenge was building a bridge in the Middle Keys across nearly seven miles of open water.

During its construction, Pigeon Key was a base camp for workers building the Seven Mile Bridge, the centerpiece of the railroad that became known as the eighth wonder of the world.

From 1908 to 1912, more than 400 workers lived in the railroad village on Pigeon Key — and despite its small size, it had a commissary and one-room school. Even after the landmark span was completed, maintenance crews continued living on the island.

Tragically, a 1935 hurricane ended the railroad’s reign. But that wasn’t the end of Pigeon Key’s importance. A highway soon replaced the track, and the island became headquarters for the Florida Road and Toll Bridge District.

Today the original Seven Mile Bridge no longer carries an endless stream of cars. Instead, drivers travel a newer span that was completed in 1982. The old bridge stretches alongside the modern one, sculptural and massive, with Pigeon Key beneath. 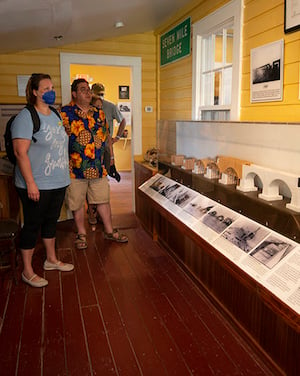 Pigeon Key visitors can explore a museum that chronicles the island’s history and the building of “Old Seven.” (Photo by Andy Newman, Florida Keys News Bureau)

Pigeon Key is listed on the National Register of Historic Places as a true American treasure — but, even so, it’s far too often overlooked by vacationers driving through the Keys.

Do not even THINK about making that mistake.

Instead, spend a few hours exploring this spot whose history transports you back in time … and whose geography means there’s nothing on earth quite like it.

What the best way to reach the remote little island? Thanks to the completion of the $44-million restoration — almost 110 years after the Over-Sea Railroad’s first train steamed across the bridge and through the Keys — you can stroll, run, bike or even rollerblade along the 2.2-mile span to get there.

The journey feels like floating over water, with a soundtrack composed of the cries of circling sea birds and the hypnotic wash of waves. On the way, try peering into the blue depths below to spot sea turtles, rays, silvery tarpon and other marine creatures. 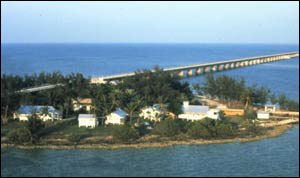 Despite its small size, Pigeon Key played a huge and unforgettable role  in Keys history.

One of the original buildings houses a museum whose artifacts showcase “all things Pigeon Key” from its pivotal railroad days to current times. In this spot, where work crews expended unrelenting effort to build the railroad, you can really grasp the breathtaking (and nearly impossible) scope of Flagler’s project.

In fact, you can spend the entire day on the island — enjoying a guided historical tour, soaking up subtropical sun and open-water vistas, picnicking, doing some catch-and-release fishing, snorkeling along the shoreline and absorbing the atmosphere of an earlier era.

As well as reaching Pigeon Key by pedestrian or pedal power, visitors can currently take a ferry that departs from the Faro Blanco Marina in Marathon. In the spring of 2022, a 60-passenger tram is expected to debut to carry people back and forth along “Old Seven.”

If you’re visiting the Florida Keys, don’t (and that means DON’T) miss the chance to discover the little island that played such a big role in history. It’s an only-in-the-Keys experience  that you’ll remember forever.