When the COVID-19 crisis triggered travel bans and stay-at-home orders around the U.S. and the globe, Key West’s LGBTQ venues took advantage of the resultant “downtime” by upgrading their properties and incorporating new health and safety measures. There were also many other achievements of note to benefit Key West’s LGBTQ community and visitors in 2020. Here are some highlights. 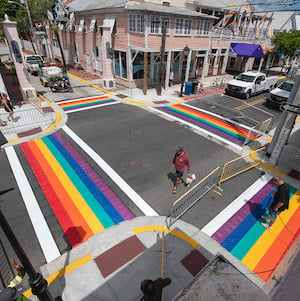 The city of Key West’s new rainbow crosswalks add color to all four corners of the intersection of Duval and Petronia streets. (Photo by Rob O’Neal, Florida Keys News Bureau)

Rainbow Crosswalks Return to the Streets of Key West. In June, Key West city workers installed four permanent rainbow crosswalks at the intersection of Duval and Petronia streets in the heart of the island’s LGBTQ entertainment district.

Rainbow crosswalks were originally installed on Duval Street in 2015, and quickly become a city landmark and popular selfie stop. Their replacement was necessitated by a repaving project for Duval — and also allowed for a brilliant redesign that makes the rainbow colors stand out WAY more vividly against the asphalt than the previous version.

The new and improved rainbow crosswalks span all four corners of the intersection and proudly feature long bands of all six colors of the rainbow flag. Spearheaded by the city and the Key West Business Guild, the crosswalks are composed of pre-formed thermoplastic color stripes. After the stripes were laid on the street by city workers, they were heat-treated with propane torches to affix the colors on the pavement permanently.

Key West Re-elects Mayor Teri Johnston. In August, Mayor Teri Johnston, the first openly gay woman elected mayor of a major Florida city, was re-elected to a second term. Popular and well-respected, Johnston has lived in Key West for more than 20 years after coming to the island from Illinois. Towleroad interviewed the mayor in 2019, and allowed us to share some excerpts from that interview with our blog followers (click here to read it). 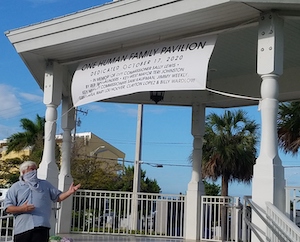 While the event is usually a two-day charity ride, 2020’s “reimagined” ride’s participants had three days to accomplish their goals. They could also choose to bike, walk, run, swim, kayak or engage in any physical activity of their choosing — in Florida or anywhere across America. The only requirement was that entrants’ favored physical activity had to be done in any metric of 165.

The cycling fundraiser held in November raised $635,000 dollars, and 100 percent of the proceeds will be distributed among various AIDS service organizations throughout Florida.

We are very proud of our Florida SMART Ride event, the second-largest AIDS fundraising bicycle ride in the U.S. and the only one to include the nation’s southernmost city. 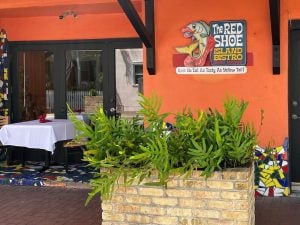 The Aquaplex (formerly known as the Aqua Bar and Nightclub), located at 711 Duval St., added an on-site Asian-themed restaurant in its open-air backside bar and patio area, aptly named Poké in the Rear. The eatery offers lunch, dinner and late-night menu options along with a full bar.

The Bourbon Street Entertainment Complex, which entertains patrons at 724 Duval St.,  opened the Red Shoe Island Bistro. The bistro serves breakfast, lunch, and dinner — with a special brunch on Sundays.

In addition to our gayborhood getting a food upgrade, many of our entertainment venues have a fresh new look with recent renovations now complete. Additionally, extensive COVID sanitization and safety protocol procedures were instituted.

We also welcomed expanded outdoor seating capacity (and socially distanced it), so you can revel in our idyllic island weather 365 days a year — hopefully with a refreshing libation in hand in 2021.