When my family and friends ask, “Do you love living in Key West?” I proudly boast about our “One Human Family” philosophy (more on that later) — and then happily inform them that our little slice of paradise is often described as “close to perfect, but far from normal,” and it certainly lives up to that designation. 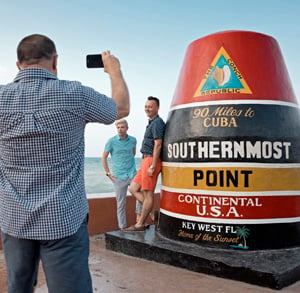 (A few friends have mentioned that a spot “far from normal” sounds perfect for me, but I just take that as a compliment …)

Our two-mile by four-mile subtropical island paradise is well known as the southernmost city in the continental U.S.; however, it’s also famous for its flourishing LGBTQ community.

Key West is a place where LGBTQ travelers are free to be themselves wherever they go, and rainbow flags fly proudly at homes, businesses and government buildings. A place where multi-colored fragrant flora surrounds historic residences once lived in by gay and lesbian literary icons including Tennessee Williams, Elizabeth Bishop and James Merrill.

Renowned for its live-and-let-live atmosphere, our island consistently ranks among the top LGBTQ resort destinations worldwide, welcoming some 250,000 LGBTQ visitors each year (wow, that means a lot of Key lime pie being consumed!).

Even the political atmosphere reflects this enthusiastic diversity. In 1983 Key West was the first city in the U.S. to elect an openly gay mayor. Then in 2018, we elected  Teri Johnston, the first openly gay woman ever to be elected mayor of a major Florida city.

“Key West has always been at the forefront of inclusiveness, equality and diversity,” said  Kevin Theriault, executive director of the Key West Business Guild. “All are truly welcome in our unique island community.”

The city’s most famous thoroughfare, Duval Street, stretches from the Atlantic Ocean at one end to the Gulf of Mexico at the other — and includes the “Pink Triangle,” a cluster of LGBTQ bars, entertainment clubs and stores around the 700-800 blocks of the iconic street.

The area is also home to four permanent rainbow crosswalks installed by the city in 2015 — which received a fabulous makeover in June of 2020 (many thanks to Mayor Teri and the Business Guild for that!).

To sum it up, the relaxing and warmly accepting destination of Key West is a place where LGBTQ visitors and residents can be honest, open and comfortable expressing their individuality. After all, our permanent rainbow crosswalks are a beautiful reminder that we don’t just celebrate Pride in June — we live it all year long.