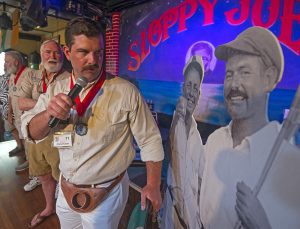 Hemingway Look-Alike finalist Chris Dutton, competing as a “young Hemingway,” eyes a cutout photo of Ernest Hemingway in his younger days while trying to convince the contest judges to name him the winner. (Photo by Andy Newman, Florida Keys News Bureau)

Hemingway Days salutes the vigorous lifestyle and literary legacy of the Nobel Prize-winning author, who wrote enduring classics including “For Whom the Bell Tolls” and “To Have and Have Not” during his Key West years.

It was Jon Auvil’s eighth attempt at winning the Look-Alike title, and it wasn’t an easy victory. But ultimately, after two preliminary rounds and the hard-fought finals, the 65-year-old real estate attorney from Dade City triumphed over 124 other entrants.

Look-Alike contenders were judged by past contest winners at Sloppy Joe’s Bar, the famed Duval Street saloon where Hemingway and his cohorts frequently gathered.

Crowds of spectators cheered enthusiastically for their favorites as the entrants paraded onstage at the bar and took turns speaking. Most tried to emulate the author in his later-years “Papa” persona with full beards, rugged demeanors and the sportsman’s garb or heavy wool sweaters associated with him.

Some performed song parodies designed to demonstrate their worthiness to win. One finalist even accompanied himself on a harmonica as he sang a Hemingway-themed spoof of the 1982 classic “Bad to the Bone.” 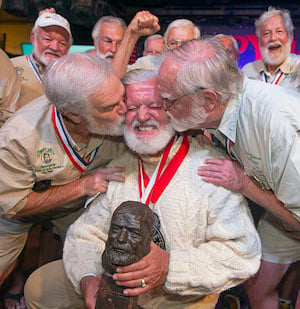 Many “aspiring Ernests” have competed for years, likening the annual July contest to a reunion with good friends. Some are drawn as much by the brotherhood that exists among the “Papas” as the chance to win. Look-Alike wives generally reunite with their fellow “Mamas” in Key West as well.

The closeness of their bond was illustrated by the heavy cream-colored sweater Jon wore when he won, and the poignant story behind it. The sweater belonged to Bob Doughty, the 2005 Look-Alike Contest winner, who passed away several years ago. His widow Randy chose Jon to wear Bob’s “Hemingway sweater” — and he believes it helped propel him to victory.

“It helped me because of the lady who honored me with her decision for me to wear it,” Jon said. “She sat there and watched me win this tonight in her late husband Bob’s sweater.”

As well as appearance, Jon said he shared other traits with Ernest Hemingway including a love of fishing. He admitted he has also tried his hand at writing fiction and a bit of nonfiction.

“Of course, every man wants to write like Hemingway,” Jon said. “He represents a lot — romance, masculinity, sports, love of the sea, love of a woman, love of children … life.”

Speaking of writing, the new “Papa” wasn’t the only winner during Hemingway Days. Nick Henke of St. Louis, Missouri, earned top honors in the Lorian Hemingway Short Story Competition, a literary highlight held in conjunction with the festival.

Lorian Hemingway, director of the short story competition that bears her name, signs copies of her book, “A World Turned Over” during a previous Hemingway Days festival. (Photo by Andy Newman, Florida Keys News Bureau)

His accomplishment was announced during Hemingway Days’ traditional evening of prose and poetry readings; his story titled “A Lot of Carrefours” was chosen over 775 other American and international submissions.

Lorian Hemingway, Ernest Hemingway’s author granddaughter, has spearheaded the literary competition since it began some 40 years ago. Nick’s story impressed the judges, she explained, in part for its lack of artifice, ability to depict vulnerability and brilliant ending.

“It’s an excellent piece of writing — very nuanced and intelligent — and there’s a lot of heart in it that is understated, but clearly present,” Lorian said.

Sincere congratulations to Jon Auvil and Nick Henke — one who shares “Papa’s” appearance and passion for fishing, and one who shares his talent for crafting important stories.