In early June, Key West landscaper John Mumford and artist Rick Worth decided to set the stage for the island’s 2010 Pride celebration by painting the rainbow flag on a local landmark. 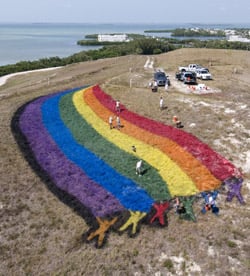 But this was no ordinary rainbow flag. For one thing, it measured 125 feet by 60 feet and required 87 gallons of paint. For another, the landmark they painted it on was a dormant landfill nicknamed “Mount Trashmore” — the highest and most visible landmass in the Florida Keys.

Big as their flag is (and according to my trusty calculator, it measures 7,500 square feet), it’s far from the largest rainbow banner ever displayed in Key West.

That title goes to a flag created in 2003 — one so massive that it stretched the entire length of the island city’s 1.25-mile Duval Street, from the Gulf of Mexico to the Atlantic Ocean.

In addition to its startling length, the 2003 flag had another claim to fame. It was sewn in Key West by Gilbert Baker, a San Francisco artist who created the original rainbow flag in 1978, to commemorate the internationally recognized gay and lesbian symbol’s 25th birthday. 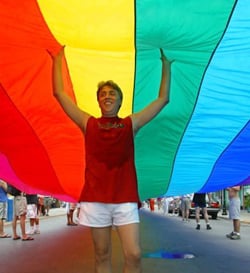 To construct the Key West flag, Gilbert (whose friends call him “the gay Betsy Ross”) spent three months on the island. He and a handful of dedicated helpers sewed approximately 17,600 linear yards of fabric — no easy feat, since that fabric weighed more than three tons!

Those of us who were lucky enough to witness the flag’s debut, the highlight of Key West’s Pride 2003, will treasure the memory for a very long time.

It took about 2,000 volunteers to unfurl the flag from one end of Duval Street to the other. The crowd that gathered to help and watch included gay and straight couples, people of widely varying colors and ages, families with children, and even people in wheelchairs.

Nancy Mathys of Key West couldn’t see the flag, but she was determined to be part of its unfurling. Holding her white cane, guided by a male companion, she stood in line with other volunteers waiting to carry Gilbert’s massive creation as it was pulled out of its support truck.

“I think it’s wonderful that so many people have come out,” Nancy said as she waited. “It’s a special day to be part of all this.” 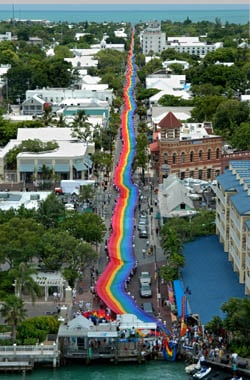 Gilbert’s flag stretches down Duval Street from the Gulf of Mexico to the Atlantic Ocean in a sea-to-sea proclamation of pride and diversity. (Photo by Andy Newman/Florida Keys News Bureau)

As well as honoring the rainbow flag’s birth, the Key West flag recreated Gilbert’s original eight-color design. Pink and turquoise, which couldn’t be reproduced commercially in 1978, were sewn into the mammoth banner along with the now-traditional red, orange, yellow, green, indigo and violet.

“I started crying when the father of the flag was speaking,” said Kelly Davis of Nashville as she watched volunteers carry the flag down Duval Street. “It’s touching how everybody’s just getting along in the community — this flag stands for everybody’s freedom.”

When the rainbow banner was completely unfurled, the crowd chanted “Gilbert, Gilbert” and “Key West, Key West” as Gilbert Baker dipped one end into the Gulf of Mexico. Meanwhile, Key West’s Pride organizers and community leaders dipped the other end into the Atlantic — making the flag a sea-to-sea representation of the island’s pride and diversity.

“The rainbow flag is loved and cherished all over the world,” said Gilbert during the day’s celebrations. “It represents an idea of equality and justice for everyone.”

May that idea prevail as long as the flag is flown.