The Key West community is remembering Gilbert Baker, creator of the original and iconic LGBT rainbow flag, who recently passed away in New York City.

For many of us, Gilbert’s name evokes a once-in-a-lifetime memory: working alongside him June 15, 2003, during Key West PrideFest, to unfurl a 1.25-mile-long 25th anniversary edition of the flag on Duval Street. The gigantic banner was dubbed the “sea-to-sea rainbow flag,” because it was stretched all the way from the Atlantic Ocean to the Gulf of Mexico. 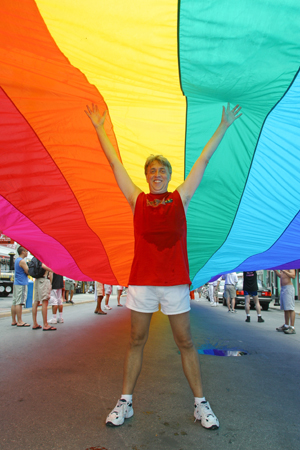 Florida Keys county commissioner Heather Carruthers has particularly vivid memories, since she was one of two Key Westers who motivated Gilbert to choose the island city for the huge flag.

“Gregg McGrady and I met him at InterPride earlier that year,” Heather recalled. “He told us about the upcoming 25th anniversary of the flag and was looking for some way and a place to commemorate it.

“He thought it would be great to have a rainbow flag span from the Atlantic Ocean to the Gulf of Mexico,” she said.

So Gilbert, who created the original flag in 1978 and was called “the gay Betsy Ross” by some of his friends, came to Key West. He ended up spending three months on the island, while he and a handful of dedicated helpers sewed approximately 17,600 linear yards of fabric that weighed more than three tons.

From his Key West workshop in April 2003, Gilbert revealed why he chose the island for the 25th anniversary project.

“The thing that sold it for me, in terms of committing to do it, was when I found that the city’s motto was ‘One Human Family’,” he said, referring to the motto adopted by the Key West City Commission in 2000 and later by the Florida Keys’ county commission, to express an accepting attitude toward all people. 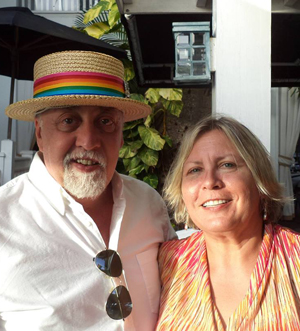 Those of us who were lucky enough to witness the flag’s debut, the highlight of PrideFest 2003, will treasure the memory for a very long time.

It took about 3,000 volunteers to unfurl the flag from one end of Duval Street to the other. The crowd that gathered to help and watch included gay and straight couples, people of widely varying ethnicities and ages, families with children, and even people in wheelchairs.

“That day that we marched the flag down Duval Street is remembered by every one of the 3,000 who helped,” Heather said. “I consider my involvement as one of the primary achievements of my life.”

As well as honoring the rainbow flag’s birth, the Key West flag recreated Gilbert’s original eight-color design. Pink and turquoise, which couldn’t be reproduced commercially in 1978, were sewn into the mammoth banner along with the now-traditional red, orange, yellow, green, indigo and violet.

“My dream is a reality today,” Gilbert said during the day’s celebrations. “We’ve made a great moment in gay history.” 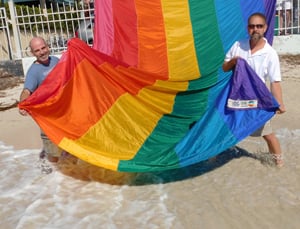 When the rainbow banner was completely unfurled, the crowd chanted “Gilbert, Gilbert” and “Key West, Key West” as Gilbert dipped one end into the Gulf of Mexico. Meanwhile, PrideFest organizers and community leaders dipped the other end into the Atlantic — making the flag a sea-to-sea representation of the island’s pride and diversity.

“The rainbow flag is loved and cherished all over the world,” said Gilbert on that historic day. “It represents an idea of equality and justice for everyone.”

Heather Carruthers said she would always remember Gilbert as warm, interesting and an all-welcoming person.

“And obviously, a very creative person,” she added.