The Key West Business Guild and its LGBT visitor center first opened their doors in 1978 to support our community and promote tourism for our all-welcoming island paradise. One of the oldest gay and lesbian chambers of commerce in the country, it was formed by an association of gay guesthouse owners in the island city. 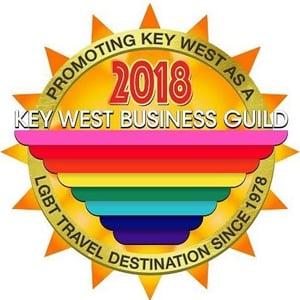 The Key West Business Guild is celebrating its 40th year of serving visitors and promoting the all-welcoming island city.

Some of the founding business members of the Guild included iconic gay and lesbian landmarks like La Te Da and Coconut Grove accommodations, the Copa and the Monster clubs, and the fabled Atlantic Shores hotel. Today the Guild has grown to include nearly 500 member businesses — and it provides important services to its members, Key West’s LGBT visitors, and their allies.

Island city resident Peter Arnow has been a highly visible and dedicated community liaison for the Guild for more than 25 years. He continually reaches out to arriving visitors and the community in promoting the organization’s events (and he’s also its very talented professional photographer).

As the Guild celebrates its 40th “birthday,” I decided Peter would be the perfect person to offer insights into its history and its role in promoting a positive LGBT environment on the island. And I’m happy to share those insights in this column.

Keys Voices: What do you think the Guild’s greatest accomplishments have been?

Peter Arnow: The Guild has been able to promote Key West  as a friendly and welcoming LGBT destination. Early on, the Monroe County Tourist Development Council was a big help, particularly with co-op advertising. It was the first organization of its kind to advertise a gay-friendly tourist destination in the U.S. The Guild was also instrumental in bringing Gilbert Baker here to create and unfurl the (1.25-mile) sea-to-sea rainbow flag, and in spearheading efforts to bring the coveted Stoli Vodka contest to Key West.

KV: Why do you think the Guild began here in Key West at the time it did? What made that the place and time? 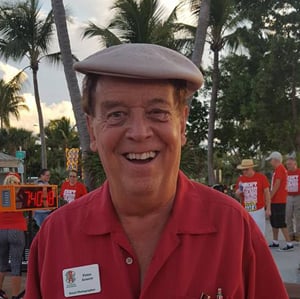 Peter Arnow, interviewed in this column, is the Guild’s longtime community liaison and photographer.

PA: The gay community has always sought out safe havens near the water “at the end of the line.” Establishment of earlier communities before Key West included Provincetown, Massachusetts, and Fire Island, a secluded section of New York’s Long Island. At the time, Key West was economically depressed, which enabled visitors to locate year-round to the warm-weather environment at a low cost — and, in the process, help to fix up the infrastructure.

KV: What do you think is the reason the Guild has continued to be a viable organization, even as the gay community has become more mainstream nationwide?

PA: The Guild has provided a number of events for the LGBT traveler to enjoy when visiting the island. Among these is the promotion of Pride Week in June, the Headdress Ball during Fantasy Fest, specialized events for men such as Tropical Heat, and Womenfest for women.

These events have been enhanced by getting Stoli Vodka involved, where the annual Stoli Key West Cocktail Classic promotes Key West nationally in 16 cities. Also, the Guild has been able to attract a wide membership of the local gay-friendly straight community to support its events.

KV: What positive impacts has the Guild had on the island?

PA: It actively promoted same-sex marriages and works hard to provide an entertaining, alternate social experience. The Guild has made Key West, as a representative of Stoli recently commented, “the gem in the crown of the U.S. gay community.”

Catching Dianne Harbaugh ‘On the Fly’