By Carol Shaughnessy|2018-02-28T18:10:30-05:00February 28, 2018|
This intricate piece of cigar box artwork was created for Key West cigar baron Eduardo Gato, whose influence is commemorated in the Gato Village Pocket Park. (From the private collection of Tom Favelli)

Key West lies just 90 miles from Cuba, and the two islands share a cultural connection that dates back more than 180 years. On March 7, a unique event will commemorate the Cuban heritage that enlivens and enhances the island city — and it includes the unveiling of what is believed to be the world’s largest cigar sculpture. 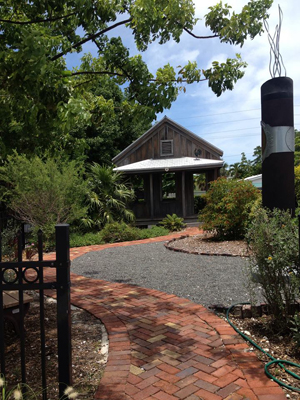 Gato Village Pocket Park was dedicated in 2010 to showcase the history and importance of Key West’s cigar-making heritage. (Photo by Tom Milone)

In the early 1830s, Cuban people began migrating to Key West in search of freedom. Many of them were skilled cigar-makers who quickly founded factories.

By the mid to late 1800s, Key West was known as the cigar manufacturing capital of the world — producing an astonishing 100 million hand-rolled cigars each year.

Today, several former cigar factories still stand, as do many cottages where workers lived. And you’ll find a memorial to the once-flourishing cigar industry in the Gato Village Pocket Park.

Dedicated in 2010, the park occupies the site of a cigar-maker’s cottage in the former Gato Village or Gatoville, a housing community built by cigar baron Eduardo Gato for workers at his Gato Cigar Factory.

The park’s creation was spearheaded by third-generation Key Wester and Gato descendant Patricia Madiedo and her husband Bruce Neff.

The project was close to their hearts for a very good reason: Pat’s grandmother and grandfather — a cigar roller at the Gato factory — once lived in the cottage. Her mother was raised there, and her mother and father spent the first few years of their married life there.

Visitors to the park can see the re-created façade and front porch of the cottage, and learn the story of Gato Village and the Gato family. And on the evening of March 7, they can also witness the unveiling of a restored 13-foot-tall metal monument in the shape of a cigar. 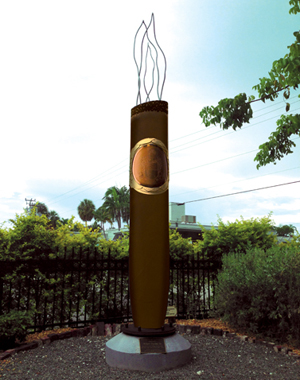 The 13-foot metal cigar sculpture, crafted by Florida Keys artist Reen Stanhouse, is believed to be the world’s largest.

Crafted by Florida Keys artist Reen Stanhouse, it’s believed to be the world’s largest cigar sculpture. It stood in the park from 2010 until the summer of 2017, when Reen determined that its exterior had started to oxidize and should be restored. So, carefully and meticulously, she did just that.

As well as the historic unveiling, the 5-8 p.m. celebration will immerse attendees in Key West’s rich heritage.

Attractions include a rum tasting presented by the Hemingway Rum Company, free Fuente Cigars provided by the Fuente family (supremely successful cigar manufacturers who helped underwrite the sculpture’s construction and restoration), and a silent auction of artwork and cigar artifacts.

And attendees can’t miss a high-energy performance by the renowned Key West Comparsa dancers — specializing in the rhythmic Cuban street dance brought to the island by cigar-makers.

“The five museums and non-profits will be displaying a wide range of local history from their point of view,” explained Bruce Neff. “This is not only a cigar history event — it’s a chance for the public to ‘meet and greet’ some of the unique history that surrounds us daily.”