In the mid-1930s, when the Great Depression had devastated the Florida Keys and much of the U.S., the federal Works Progress Administration helped bring artists and writers to Key West to paint murals, write guidebooks and teach craft classes to help revitalize the economy. 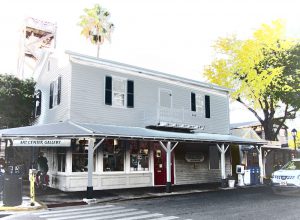 The Key West Art Center, the oldest artists’ membership organization in the Florida Keys, is housed in a historic building near Mallory Square.

Some of those classes were taught at the Key West Community Art Center, believed to be the WPA’s first public art project — which eventually grew into the Key West Art Center. Headquartered since 1960 in a unique historic structure at 301 Front St., the center is the oldest artists’ membership organization in the Keys.

Inside its picturesque wooden gallery building, which dates back to the 1890s and features the work of more than 50 Keys artists, you’ll find a visual tapestry of color and creativity. Paintings in many mediums are arranged on the walls in well-designed groupings, with ceramics and sculptures on cool white pedestals, prints in bins and even handcrafted jewelry laid out to draw your attention.

And don’t miss the upstairs gallery, where there’s a permanent exhibit spotlighting the center’s history and the works of the late Martha Watson Sauer — who was hired by the WPA to teach weaving and watercolor classes. Skilled and very prolific, she produced artwork for WPA tourist brochures as well as for the Key West Aquarium and other attractions launched in the 1930s and later. Looking at her distinctive fine art, rich in sun-dappled light, you get an almost dreamlike sense of the past.

But the Key West Art Center’s other offerings are as enticing as the works on display. Artist members offer classes and workshops (these days taught primarily online via Zoom), to share insights into various aspects and disciplines of visual artistry. 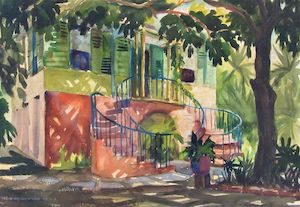 Images by the late Martha Watson Sauer, who was hired by the Works Progress Administration in Key West, are displayed on the gallery’s second floor.

In addition, the center is renowned for presenting the annual open-air Key West Craft Show and Old Island Days Art Festival. The highly acclaimed events are a longstanding tradition for Key West’s visiting and resident art lovers, and for talented exhibitors from the Florida Keys and around North America.

Actually, several hundred artists and artisans from the U.S. and Canada apply each year to display their creations in Key West’s sunny subtropical setting. The nationally recognized shows are juried to ensure high quality, and approximately 100 exhibitors are chosen for each. And believe me, these shows are absolutely NOT to be missed.

This year, the two are being combined into a single two-day event blending unique art and fine crafts. Set for Saturday and Sunday, Feb. 27-28, it’s planned at Key West’s spacious Truman Waterfront Park to allow plenty of room for social distancing.

According to organizers, the first Old Island Days Art Show was staged decades ago to raise funds to restore the building that became the Key West Art Center’s gallery. Proceeds continue to support the organization’s programs and maintain the historic building.

Today as in the WPA era, the venerable nonprofit center remains true to its mission: providing a year-round “home” for local artists and their work, and maintaining Key West’s heritage as a city of artists. Want to know more about the thriving arts community that adds so much to Key West and the Florida Keys? Just click here and here.