The seafaring spirit, culinary diversity, vibrant marinas, renegade arts emporiums and inviting waterfront bars and restaurants of Stock Island — lying just across Cow Key Channel from Key West — will be showcased for everyone to explore Friday through Sunday, Dec. 13-15. 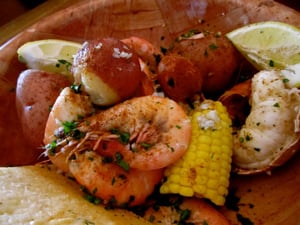 Savor a traditional Florida Keys shrimp boil during the festival — a taste treat not to be missed.

And Stock Island is well worth showcasing at a festival (or any other time). Headquarters of the Florida Keys commercial shrimping industry, it blends rustic authenticity, edgy creativity, waterfront grit and a sizeable helping of “old Keys” flavor.

The island’s unique heritage dates back to a time far before the Florida Keys became an internationally recognized vacation spot. Local lore says the Safe Harbor area was a staging hub for the Bay of Pigs invasion of Cuba in 1961, as well as the home port for a ferry to Havana.

Stock Island’s strong seaport tradition is evidenced by the commercial shrimp boats tied up at its docks, and the sight of shrimpers offloading masses of sweet Key West pink shrimp. 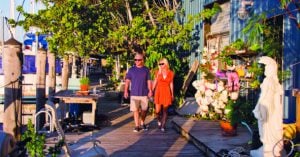 It’s also a haven for independent young artists. And its marinas are headquarters to world-class charter fishing captains and frequented by dedicated anglers.

So that’s the authentic, working-class seafaring atmosphere that the I Love Stock Island Festival celebrates — and everyone who wants to experience the community and its easygoing pleasures is invited to join in.

For example, check out Friday’s “Taste of Stock Island,” a guided exploration of local cuisine beginning at 4 p.m. Traveling via trolley, you’ll stop at seven Stock Island eateries and hotspots to savor small plates and beverage pairings. Chefs and owners will be on hand to welcome you.

Friday also features waterfront festivities as vessels from dinghies and schooners to shrimpboats, all “decked out” with holiday lights and decorations, parade through community marinas starting at 7 p.m. An after party is scheduled at the landmark Hogfish Bar and Grill, a quintessentially casual emporium on the water at 6810 Front St. 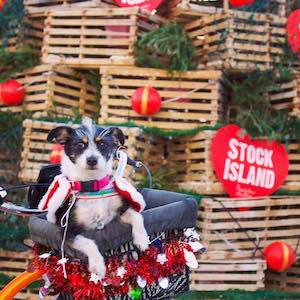 Don’t miss Saturday’s stroll through the Stock Island Arts District, where you’ll discover the working studios, one-of-a-kind shops and talented members of the colorful creative community. And if you’re eager to discover Stock Island’s natural world, consider a mini-tour of the mangroves by kayak or a sail aboard the historic schooner When and If.

Sunday is especially for foodies. First, shrimp aficionados can savor a super-flavorful Florida Keys shrimp boil at the Hogfish Bar and Grill — or you might “make a splash” during a brunch and pool party at Matt’s Stock Island Kitchen at the Perry Hotel (7001 Shrimp Road).

The festival’s culinary highlight is a Sunday spotlight dinner at the wonderful Lost Kitchen Supper Club (along the dock at 6810 Front St.), with signature cuisine prepared by Chef Norman Van Aken. With a legendary career that began in Key West, the renowned chef has earned too many professional honors to count and is known as the founding father of New World cuisine.

But even that’s not all. I Love Stock Island’s other enticements include food truck finds, a 5k walk/run, parties and even a poolside “dive-in” movie experience. And by the time the fun is over, it’s almost inevitable that you too will gleefully proclaim, “I love Stock Island!”