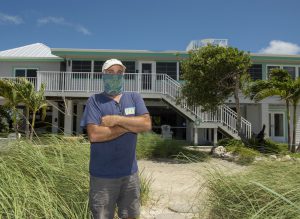 Veganism is a key component of the Deer Run experience. Years ago Jen DeMaria, today Harry’s partner-fiancée, took him to The White Pig, a bed-and-breakfast in Virginia where the owner nurtures pot-bellied pigs.

During the visit, Harry and the pigs played a game of kickball.

“We made an eye-to-eye connection,” Harry recalled. “That was it. That moment changed my life, thanks to Jen.”

The couple, who met in their home state of New Jersey, bought Deer Run 17 years ago after frequent stays at the oceanfront Lower Keys inn.

As well as an environmentalist, Harry is a man of contrasts.

A grandson of frugal Siberian and Italian immigrants, he grew up in New Jersey’s rural farm country of Gloucester County. As a teenager, he worked for the founder of the Maaco auto painting and AAMCO Transmissions companies and owned various muscle cars. In New Jersey he founded Appel Automotive Inc., a fleet service center for police and emergency vehicles. He’s also raced speedboats in the Keys. 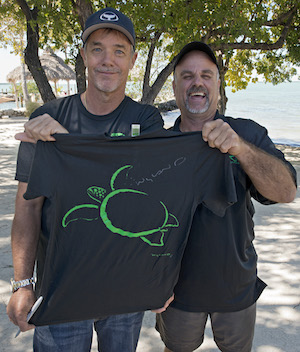 Deer Run, one of only a handful of Florida properties with the four-palm designation, is the only one in the state that’s independently owned.

Guests at the off-the-beaten-path property on Big Pine Key seek out “a place that’s quiet and with a nice beach. We run it small, clean and fun,” Harry said. “I tell our guests to travel lightly throughout the Keys because no matter where you step, there’s something living here.”

Harry Appel: My first trip was in 1974 with three friends for a post-high-school-graduation getaway. 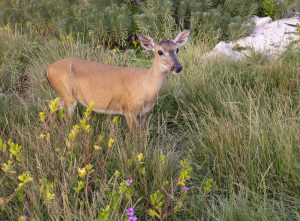 HA: Living side-by-side with and surrounded by diverse wildlife including endangered species — some found nowhere else in the world. Key deer and sea turtles are very high on my list of wildlife inspirations as I have so much exposure to them. The deer are so gentle and beautiful, while sea turtles still manage to survive over 100 million years in spite of the damaging hand of man.

HA: Far more needs to be done to protect all animals including wildlife, marine life and their habitat. With an apparent acceleration of a downward trajectory regarding environmental concerns, I feel an urgent need to be as involved as possible.

HA: Providing many years of community outreach throughout the Keys through government, citizens, independent businesses and schools by teaching ways we can help sea turtles and their habitat. I’ve also built a strong relationship with world-renowned marine artist Wyland, raising money for both Save-A-Turtle and his nonprofit Wyland Foundation.

HA: Our Earth is in dire straits; there is not a moment to waste. We all need to focus on an authentic sustainable path and live mindfully. Having grandchildren keeps me focused, as I have a moral obligation toward them and future generations. What I do is not always easy, but I know it is right.

HA: To inspire people to go vegan, and to care about more than themselves, bringing them to action.

HA: Go vegan. Get involved in community causes. Think about more than yourself and your own immediate circle of life.

HA: Be it land or sea, observing nature.