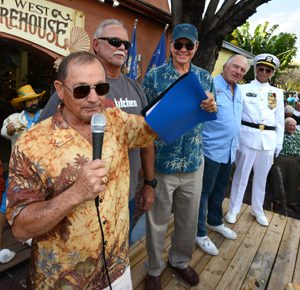 Former Key West Mayor Dennis Wardlow (left) and other founders of the Conch Republic re-enact the historic secession ceremony on a past “birthday” of the irreverent republic. (Photo by Andy Newman, Florida Keys News Bureau)

These offbeat events and many more are part of the 40th annual Conch Republic Independence Celebration, held April 15-24 to commemorate the Florida Keys’ symbolic secession from the United States.

The historic event took place April 23, 1982, prompted by a U.S. Border Patrol checkpoint that was set up without warning on the Florida Keys Overseas Highway (the only road into and out of the islands). Federal agents were supposedly searching cars for illegal drugs and other contraband — but their roadblock created a massive multi-mile traffic jam of vehicles leaving the Keys.

They then declared “war” on the mother country — a good-natured insurrection that involved pelting a hapless U.S. Navy officer with stale Cuban bread — promptly surrendered and demanded $1 billion in foreign aid. 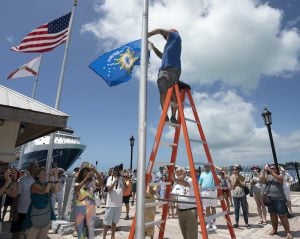 The outrageous strategy worked, gaining worldwide attention and a surprising measure of respect. Even more important, the Border Patrol checkpoint vanished as suddenly as it had appeared.

And the fame of the Conch Republic, whose motto is “We Seceded Where Others Failed,” only increased over the years.

Today the republic is acclaimed around the world as the Florida Keys’ irreverent alter ego. Proud “patriots” fly the royal blue flag of the little “nation,” and mark its birthday each year with a roster of eccentric events.

On April 15 this year, Dennis Wardlow and other Conch Republic dignitaries took part in a waterfront ceremony at Mallory Square that began the 40th annual celebration.

Events included a flag raising, a recounting of the republic’s storied history and a performance of the brilliantly written Battle Hymn of the Conch Republic — with spectators joining in on rousing choruses of “Glory, Glory, Conch Republic.” 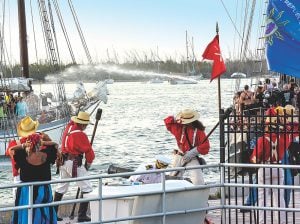 Perhaps unsurprisingly, the Conch Republic never received the billion dollars in foreign aid that was requested after the 1982 secession (although some optimistic citizens are still waiting for it). But that hasn’t dampened the intrepid spirit of the republic, or lessened the recognition it continues to receive.

“It’s just been amazing that here we are, 40 years later, and it’s still going strong,” marveled Dennis. “And the government has not put up any border checkpoints, and they haven’t messed with us.”

The 2022 independence celebration continues through Sunday, April 24. Scheduled highlights include a pirates’ ball, a sailing race that recalls the Keys’ seafaring heritage, and an open-air bed race billed as “the most fun you can have in bed with your clothes on.”

While the 40th anniversary is an undisputed milestone, don’t fret if you can’t hop on a plane right now to join the festivities. Just know that, whenever you do arrive, you’ll be warmly welcomed in the Conch Republic.