In the waters off Key Largo, divers have installed a bronze plaque that names and honors the final 250 of 1,000 contributors to a project that sank a former U.S. Naval ship — exactly 15 years ago — to become an artificial reef in the Florida Keys National Marine Sanctuary.

The panel was attached to the side of the Spiegel Grove, the third-largest ship ever scuttled to create a new reef for divers, as another milestone in a story that proves sometimes truth IS stranger than fiction. 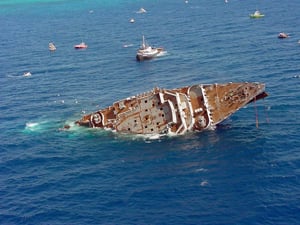 On May 17, 2002, the Spiegel Grove rolled over after it sank prematurely in the waters off Key Largo. (Photo by Sergio Garcia, Florida Keys News Bureau)

On May 17, 2002, the 510-foot-long former landing ship dock was undergoing final preparations for a dramatic sinking that afternoon. Suddenly the vessel began to take on water, quickly rolled over and partially submerged — leaving its upside-down bow protruding above the Atlantic Ocean’s surface.

Mercifully, there were no injuries as workers calmly exited the ship. But the sinking-gone-bad sparked news coverage around the world.

“When the sinking went awry it was difficult for everyone to take, especially me,” remembered Rob Bleser, one of two volunteer project managers. “But we couldn’t have asked for anything more — we wanted it to be the most famous wreck in the world, and here it is on every TV channel for weeks and weeks.

“We couldn’t have gotten it any better,” he admitted.

Three weeks later a salvage crew fully scuttled the ship. However, it wasn’t positioned as planned. Instead it came to rest on its starboard side in 130 feet of water.

The wreck soon opened for diving. But even then, the Spiegel Grove story wasn’t over.

In July 2005 wind and currents from Hurricane Dennis, which passed southeast of the Florida Keys, did what human effort couldn’t accomplish. Remarkably, the natural forces pushed the ship upright into the position originally intended.

In this May 30, 2002, photo, the upside-down hull of the Spiegel Grove is visible as salvage divers make preparations to rotate and fully sink the 510-foot retired Navy vessel as an artificial reef. (Photo by Andy Newman, Florida Keys News Bureau)

Why did the Spiegel Grove sinking go awry?

The ship had been decommissioned by the Navy in 1989 because of a lack of structural integrity in its watertight bulkheads. It was mothballed in the James River Naval Reserve Fleet in Norfolk, Virginia, with other vessels for more than decade before being made available for the Keys artificial reef project.

Project officials believe that a bulkhead in the back engine room unexpectedly gave way, causing the ship to sink prematurely without enough buoyancy control to keep it level so it would sit on the ocean floor.

Even before the scuttling snafu, the project was complex. It required eight years of seeking federal, state and local permissions and inspections prior to the sinking.

Among the federal requirements was a seven-year marine life survey project conducted by the Florida Keys’ Reef Environmental Education Foundation. REEF staff and volunteers have noted more than 200 different species of fish on the wreck.

About half of the project’s $1.5 million cost was paid for by the Florida Keys Tourist Development Council, with the balance coming from private donations — helped by a Key Largo Chamber of Commerce program that sold 1,000 lifetime dive medallions for $250 each.

As well as the plaque installation honoring the final donors, the Spiegel Grove’s 15th anniversary is being commemorated with a special exhibit at the History of Diving Museum in Islamorada.

Now through Labor Day weekend, underwater enthusiasts can view artifacts that highlight the military personnel who served on the venerable vessel, missions it participated in, preparations that were made for its sinking and the positive environmental impact this artificial reef — now an undersea paradise for advanced- and wreck-certified divers — has had on the Florida Keys ecosystem.