Dive a ‘Movie-Star’ Shipwreck and a World-Class Reef

The largest shipwreck available for sport diving in the Lower Keys is a popular stop on the Florida Keys Wreck Trek for divers — and a relatively easy introduction to wreck diving for novices. 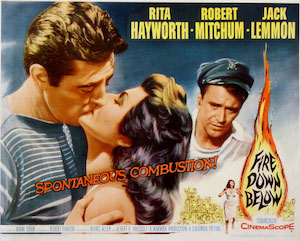 Before becoming a Lower Keys artificial reef, the vessel now called the Adolphus Busch co-starred in this famous film.

The 210-foot-long Adolphus Busch, intentionally sunk in 112 feet of water Dec. 5, 1998, lies between world-famous Looe Key and American Shoal, southwest of Big Pine Key. The location means the wreck is easily accessible and close to the spectacular underwater beauty of Looe Key.

As well as being a short-haul island freighter, the vessel that became the Adolphus Busch had a movie career. It co-starred with Robert Mitchum, Jack Lemmon and Rita Hayworth in the 1957 film “Fire Down Below.” Built in Scotland in 1951 and previously called London, Topsail Star, Windsor Trader and Ocean Alley, the ship was christened Adolphus Busch Sr. by the Anheuser-Busch brewery founder’s grandson, Adolphus Busch IV. The younger Busch, an avid diver and fisherman, donated $200,000 toward the purchase, cleanup and sinking of the vessel.

Because the ship was sunk in a protected area, no explosives were used in the scuttling process. Instead, 12 holes were drilled into the Busch and water was pumped into its hull. It settled upright and in perfect condition on a sandy bottom, with its wheelhouse at 70 feet and main deck at 90 feet depths. 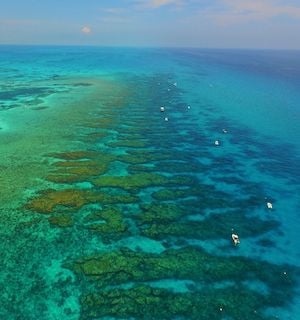 Looe Key Reef, a part of the Florida Keys National Marine Sanctuary, is widely regarded as a world-class dive experience.

For an extraordinary wreck-reef dive day, underwater enthusiasts can combine an exploration of Looe Key Reef with a dive on the Busch — and the chance to see schools of baitfish, 250- to 450-pound goliath grouper, a colorful spectrum of snappers, amberjacks, grunts, blue runners, barracuda, sharks and schools of snook, permit and other juveniles. Curious sea turtles occasionally make a pass through.

Presented by the Lower Keys Chamber of Commerce and coordinated by US1 Radio 104.1 FM, it provides a “submerged soundtrack” for divers discovering the Keys’ diverse realm of tropical fish, coral formations and other marine life.

Music broadcast by the radio station is piped underwater through speakers suspended beneath boats above the reef. The sea-focused playlist typically includes melodies like the Beatles’ “Yellow Submarine” and the themes from “The Little Mermaid” and “Pirates of the Caribbean.” 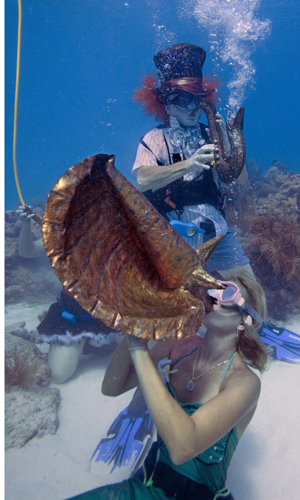 The music is interspersed with diver awareness messages about ways to balance enjoying the underwater world and minimizing environmental impacts on the planet’s reefs, whose rich biodiversity has led them to be called the rainforests of the sea.

Mote has planted over 75,000 coral fragments along about 130 acres of Florida’s coral reef. The center also is identifying, growing and restoring coral genetic varieties that are resilient to disease and climate change impact threats.

The Lower Keys center, located at 24244 Overseas Highway, offers complimentary public tours each Tuesday morning for people interested in learning about the science behind coral restoration. Reservations are encouraged, but not required.