Costuming the Cat … and Other ‘Tails’ From Pet Masquerade

It’s not easy to costume a cat. Particularly when the cat is a 20-pound male Norwegian Forest Cat named Alex, who’s very conscious of his dignity, and the costume is a tasteful silk dress and a rope of pearls.

Getting him used to his finery is likely to be a lengthy process involving hisses, claws and curses (both human and feline), but I’m determined to prevail. And I’m not alone in this odd purr-suit. 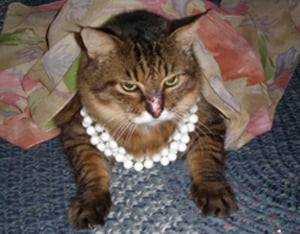 Alex the cat is not happy in his Pet Masquerade finery — a tasteful silk dress and pearls. (Photo by David Koontz)

All over the Florida Keys, otherwise sane people are constructing costumes for their cats, dogs, parrots, potbellied pigs, rabbits and heaven knows what other domestic species. The people are absolutely serious about this enterprise, though most of the animals are as uneasy as Alex.

What’s behind this strange phenomenon? A wacky annual costume competition for critters, known as the Pet Masquerade, that’s a highlight of Key West’s 10-day Fantasy Fest masking and costuming celebration each October.

This year’s animal antics will take place at the gorgeous new Key West Amphitheater at Truman Waterfront Park. And believe me, the fur is sure to fly when several dozen costumed pets and their people strut their stuff in front of two or three thousand enthusiastic spectators.

Contestants in the 2018 masquerade are encouraged to design their costumes around this year’s Fantasy Fest theme of “Oh … The Games We Play!” — inspired by amusements ranging from traditional board games to furry role-playing adventures. 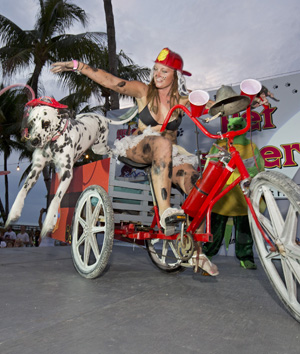 People and their pets might be costumed as Angry Birds, Donkey Kong and his jungle clan, canine and feline Monopoly tokens, or even runaways from the Nintendogs universe. (Alex, FYI, will be impersonating Mrs. Peacock, the elegant grande dame from the mystery board game Clue).

But believe me, a Norwegian Forest Cat in drag won’t be the most unusual sight at Pet Masquerade. Among the more bizarre past entries have been a Dalmatian riding a three-wheeled fire engine, a “vampire cat” complete with its own cat-sized coffin and Dracula-like human cohorts, a “steam punk” pug and person in psychedelic garb, a Chihuahua named Maya who was body-painted to portray a tiny deer, and a musical salute to Alfred Hitchcock’s “The Birds” featuring a blonde-wigged Borzoi hound costumed as “Birds” actress Tippi Hedren.

The family-friendly 2018 Pet Masquerade is scheduled at 5:30 p.m. Wednesday, Oct. 24, with registration for competitors beginning at 4 p.m.

That means Florida Keys pet lovers are currently stitching sequins and feathers onto costumes, reluctant animals are fleeing from fittings, and racing greyhounds throughout the island chain are undoubtedly hiding every time they hear the strains of Turner’s “Private Dancer.”

As for me, I’m still trying to convince Alex the Norwegian Forest Cat that he looks terrific in a silk dress and pearls.