According to fictional sleuth Sherlock Holmes, “The game’s afoot.” Thousands of costumed revelers will prove that the game-playing is indeed “afoot” in Key West Friday, Oct. 26, during the Masquerade March that begins at the local cemetery. 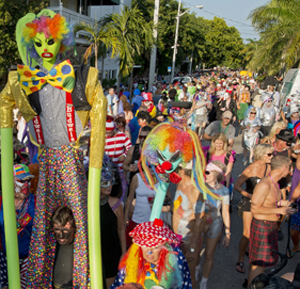 The pedestrian procession is a highlight of the island’s 10-day annual Fantasy Fest, a lavish pre-Halloween masking and costuming festival scheduled Oct. 19-28. The 2018 festival is themed “Oh … The Games We Play!” and celebrates games ranging from Scrabble to immersive role-playing adventures.

Famed as “the locals’ parade,” the march typically draws spirited bands and merrymakers wearing everything from elaborate masks and costumes to offbeat creations inspired by the festival theme.

For Florida Keys residents and many seasoned visitors, the event is a “must-do” favorite. While Fantasy Fest’s grand parade features huge decorated floats and glamorous costumed dancing groups, the march offers the perfect chance for individuals and small groups to take center stage and show off their creativity.

And so they do — breaking out the glue guns, campy feathers and retro accessories, and assembling them into costumes that range from breathtaking displays of style to satirical spoofs of current events.

For example, in 2015 the festival theme was “All Hallows Intergalactic Freak Show.” Among the standout marchers were a towering space monster carrying its caged captive, “beauty school dropouts from Mars” who pranced down the street in sparkling robes and silver hair curlers, and a trio in gigantic blue-and-silver headdresses paying tribute to the immensity of the universe.

“I am the supreme ruler of the universe and I’m here to create peace and order,” reported trio leader Daniel Bitnar. Daniel, by the way, is one of the most talented costume designers in this or any other universe — and each year’s creation outshines his previous ones. 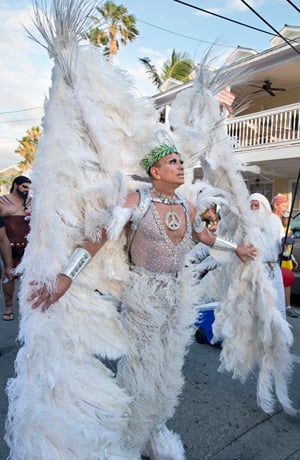 Master costume designer Daniel Bitnar, dressed as a dove of peace, proceeds down Fleming Street during the 2017 Masquerade March.

Several years before that, Fantasy Fest was themed “Habitat for Insanity,” which inspired a wacky and wonderful Masquerade March. Masked, costumed and body-painted marchers included escapees from “Margarita Madhouse” dressed in hospital gowns, a male quartet in matching Wonder Woman costumes, two polka-dotted walking octopuses and a not-very-religious order with self-confessed “nasty habits” that called itself the Sisters of Insanity.

Notables in the 2017 event included a troupe costumed as dancing orange dinosaurs, a quartet of fiercely battling bumper cars and a woman impersonating the Statue of Liberty. Veteran marcher Daniel Bitnar stole the show, dressed as the dove of peace in a spectacular spangled and feathered ensemble with huge wings.

So what can you expect at this year’s extravaganza? Given the festival’s game-focused theme, marchers might be costumed as “Dating Game” dropouts, Super Mario brothers, characters from Clue or even sinister Sims.

Beginning at 5:30 p.m. at the picturesque Key West Cemetery’s Frances Street entrance, they’ll promenade along Fleming Street, stopping for libations at bed-and-breakfast inns along the way. Spectators typically line the streets of the island’s historic district, applauding and sometimes joining in, before the procession reaches its end near the Fantasy Fest Street Fair on mile-long Duval Street.

The march is free to enter and watch, and it’s bound to be flamboyant, good-spirited and fun beyond belief. So start designing your costume and making travel reservations ASAP — because “the game’s afoot,” and this is one “game” you don’t want to miss.

Costuming the Cat … and Other ‘Tails’ From Pet Masquerade