Clinton Curry is a seventh-generation Key West resident (or “Conch”) whose ancestors arrived some 180 years ago from the Bahamas’ Green Turtle Cay. The fifth generation of his family to be born on the island, he has lived there for all but two years of his life. 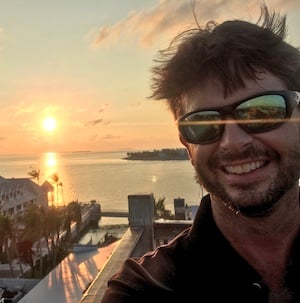 As part of his work with Historic Tours of America, Clinton shares the rich history of Key West with visitors — including the history of his family, which is deeply woven into the island’s past.

Passionate about preserving the history and culture of his hometown, Clinton has worked with Historic Tours of America, a Florida Keys-based heritage tourism and attractions company, since 1987.

Blowing into the fluted pink-lined shells is a centuries-old local tradition. Conch “horns” were used as signaling devices by early Native Americans, 19th-century seafarers and resident shipwreck salvagers among others.

The art of coaxing sounds from the shell has been passed down for generations in Clinton’s family, and he’s been a frequent winner of the island’s annual Conch Shell Blowing Contest. But while most “conch honkers” can only produce tuneless blasts, he’s known for playing excerpts from intricate melodies — and for blowing two shells at once.

Clinton enjoys teaching “shell musicianship” to others including his daughter Parker, and regards it as a small way to help preserve his family’s and Key West’s heritage. Recently he discussed how that heritage influences and motivates him.

Keys Voices: What aspects of the Keys environment or way of life matter most to you? 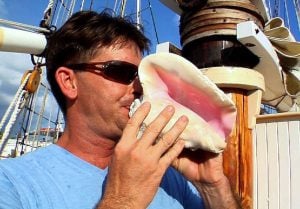 Clinton Curry: The aspect of Keys life that matters most to me is connection within the community. Sure, many of my childhood friends and their families have moved on — but many are still here. It brings a smile to my face when I see them out and about, living their best life. Secondly, the incredible diversity of people and cultures we have in the Keys matters to me.

KV: Who or what inspired you to become passionate about respecting and protecting the Keys’ natural world and heritage?

CC: Like many other generational “Conchs,” it’s my parents and those that came before me. The experiences gained in my childhood laid a foundation for respect of our environment and its balanced usage. My first full-time job was as a tour guide at the Key West Aquarium. I recognized that I had a responsibility to not only share all the great stories about the animals with our visitors, but an even greater responsibility to share conservation and preservation efforts. 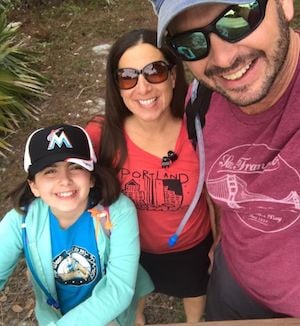 CC: My family and respect for others. For as long as I can remember, I have desired to be a positive representative for my family, both personally and professionally. As someone who has worked in the tourist industry for most of my life and who also loves to travel with my wife and daughter, I recognize how enriching travel and vacations are. Just as I want to have positive experiences when traveling, professionally I strive to provide the same for those choosing to travel to Key West and the Florida Keys.

CC: I love kayaking in the backcountry, cycling the Florida Keys Overseas Heritage Trail, sitting on the waterfront at sunrise and sunset, and lastly stargazing. I’d have to say my favorite is kayaking, because it provides the opportunity to combine the bulk of things I like to do into one completely immersive activity.

CC: The message I like to communicate is that Key West is so much more than the party town many perceive it to be. While many come here for the party atmosphere, many wind up leaving with a greater appreciation for all that Key West offers with its rich cultural heritage and diversity.