Celebrate the 10th ‘Birthday’ of the Vandenberg Artificial Reef

If you’re a diver looking to log a world-class bucket-list dive experience, then head for Key West to participate in the 10-year “on-the-bottom” anniversary of the USNS Gen. Hoyt S. Vandenberg. Sunk May 27, 2009, it’s the world’s second-largest vessel intentionally scuttled to become an artificial reef. 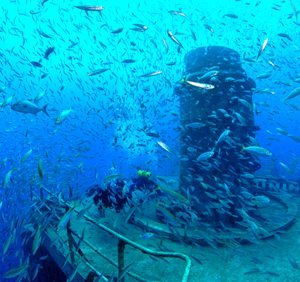 Divers swim over Vandenberg amid thousands of fish just a year after the vessel was sunk off Key West in the Florida Keys National Marine Sanctuary. (Photo by Don Kincaid, Florida Keys News Bureau)

Properly prepared artificial reefs help take human pressure off natural coral reefs, providing alternative structures for scuba divers to explore as well as additional marine habitats. They increase species populations and provide a platform for education and research, while preserving the history and heritage of the vessel.

Vandenberg, a former military ship that monitored Soviet missile launches during the Cold War, sank to the ocean bottom in an upright position in 1 minute, 45 seconds — preserving a bit of U.S. history off the Florida Keys. (It also preserves a small slice of film history, because “Vandy” played a role as a Russian science ship in the 1999 movie “Virus.”)

The venerable vessel lies approximately 7 miles south of Key West International Airport in nearly 150 feet of water in the Florida Keys National Marine Sanctuary. And the Memorial Day weekend commemoration, set for May 23-27, provides plenty of opportunities for experienced divers to explore the ship and celebrate its 10th “birthday” as an artificial reef.

Thursday, May 23, 6-9 p.m. Join Vandy supporters for a public preview of Austrian artist Andreas Franke’s “Plastic Ocean” on the U.S. Coast Guard Cutter Ingham Maritime Museum at Key West’s Truman Waterfront. Enjoy this above-water, open-to-the-public preview of the fantastical photographic artistry of Andreas Franke, whose newest 24-piece evolution of his famed “Sinking World” exhibit is themed “Plastic Ocean.” The exhibit’s message is focused on a worldwide shift to remove and prevent further plastics and micro-plastics from entering life-giving ocean waters. There’s no entry fee for the event, but a donation to the Ingham Maritime Museum is appreciated.

Friday, May 24, 8:30 a.m. to 1 p.m. Join a morning trip with a professional Key West dive operator to dive Vandenberg — and get a peek as specialty divers install the art pieces of “Plastic Ocean” along both sides of the shipwreck’s hull. Bring an underwater video or still camera to capture this unique opportunity. Plans call for the “Plastic Ocean” exhibition to be displayed underwater from May 25 to August 25. 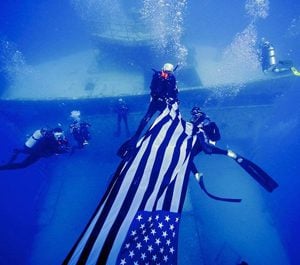 Monday, May 27, an American flag and a Florida Keys Conch Republic flag are to be unfurled aboard Vandenberg to commemorate the sinking date 10 years ago and the Memorial Day holiday.

Saturday, May 25, 8:30 a.m. to 1 p.m. Join a morning trip with a professional dive operator for a memorable and moving dive experience. Placement of a dedicated POW/MIA table setting is planned, continuing a tradition started during the Vietnam War era in military messes to honor service members that are prisoners of war and/or missing in action. The semi-permanent table setting will be placed at a to-be-determined location on Vandenberg by former military members and local diving professionals. Wreck specialty-certified divers can view it during summer 2019.

Monday, May 27, 8:30 a.m. to 1 p.m. Join a Memorial Day morning dive with a professional Key West dive operator. Be there as both an American flag and the flag of the Florida Keys’ Conch Republic are unfurled aboard Vandenberg to commemorate the sinking date 10 years ago — and also the Memorial Day holiday. Bring an underwater video or still camera to capture the once-in-a-lifetime moment.

Other anniversary events include social gatherings and a lionfish derby where teams of divers vie to capture and remove as many of the invasive predators as possible from Keys waters.

As well as being an unforgettable dive in its own right, Vandenberg is the southernmost “anchor” in the Florida Keys Wreck Trek. A string of nine vessels from Key Largo to Key West, the Wreck Trek is a fascinating trail for recreational divers to explore.

Want to know more about Vandy and its intriguing history? Discover the complete story of this unique vessel and its journey from ship to shipwreck to artificial reef, plus a complete schedule of 10th anniversary events, by clicking here.