By Greg Tromba|2022-02-10T19:17:03-05:00February 9, 2022|
Internationally renowned playwright Tennessee Williams purchased this residence in a quiet Key West neighborhood in the 1940s and made it his home for the rest of his life. His years on the island are commemorated during the annual Tennessee Williams Birthday Celebration.

The creative heritage of America’s southernmost city, Key West, centers on its literary legacy — a legacy built painstakingly by some past residents one play, book, poem or short story at a time. One such contributor was legendary gay playwright Tennessee Williams. The literary giant had close ties with the Key West community, first visiting the island in 1941 and subsequently buying a home where he lived until his death in 1983. 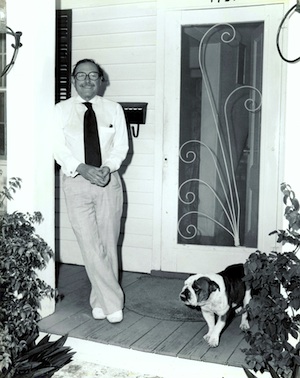 So it’s not surprising that he’s being honored with a series of events celebrating what would have been his 111th birthday (which falls on March 26) throughout the month of March in Key West.

Williams’ fans can explore the genius behind the iconic playwright’s work during Key West’s annual Tennessee Williams Birthday Celebration, with events continuing through a “grand finale” birthday bash and fundraiser set for April 1 at the Tennessee Williams Museum (513 Truman Ave.).

The intriguing and informative celebratory activities are presented by the founders of the Tennessee Williams Key West Exhibit, the museum’s critically acclaimed predecessor, and the Key West Art & Historical Society that operates the museum.

Activities this year include a reading of Williams’ poetry and prose produced by Key West’s Fringe Theater, showings of films based on his plays, Waterfront Playhouse’s one-night-only presentation of the playwright’s “This Property Is Condemned,” and poetry and short story writing contests in his honor. (For links to contest entry information and guidelines, click here.)

Celebration highlights include guided tours of the Williams museum on March 17 and 26 led by co-founder and museum curator Dennis Beaver, touching on topics that include the Key West filming of “The Rose Tattoo.” I’ve had the privilege of joining Dennis for tours, and he will make you feel like you’re going back in time and reliving Williams’ colorful life on the island.

After taking a tour with Dennis, I highly recommend you do some additional exploring of the unique museum. There are so many opportunities to learn about Tennessee’s long years in Key West! You’ll find an extensive collection of photographs (mostly taken on the island), first-edition books, plays and even a typewriter used by Williams when he lived in Key West. 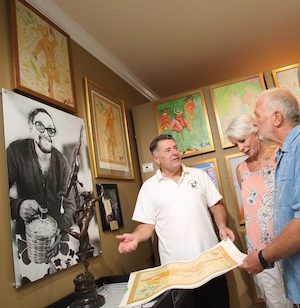 Curator Dennis Beaver shows visitors some of the exhibits at the Tennessee Williams Museum in Key West. (Photo courtesy of the Key West Art & Historical Society)

There’s also a print of an original painting he completed at age 17, one of his college yearbooks featuring a poem he wrote and a gorgeous artist-crafted model of his Key West home.

Now, back to the actual birthday celebrations. Have you missed going to the movies during the pandemic? If you’re ready for films again (accompanied by some mouth-watering popcorn slathered in butter, and maybe a box or two of Junior Mints), you’re in luck. The March birthday festivities will include evening showings of classic movies based on Williams’ award-winning plays, including “The Night of the Iguana,” “Baby Doll” and “Summer and Smoke,” at the Tropic Cinema.

On April 1, the celebration comes to a close with a belated birthday soiree and fundraiser set for 5-7 p.m. at the Tennessee Williams Museum. Attendees can expect champagne — and birthday cake, of course! Winners of the short story and poetry contests will be revealed at the party and will give readings of their work.

If you’re unable to attend the fundraiser and would like to donate, click here. Museum curator Dennis Beaver likes to remind his supporters, “As Blanche says in ‘A Streetcar Named Desire,’ we depend on the kindness of strangers — and friends as well.”

Do you have a birthday or special occasion of your own that you’d love to celebrate in the Florida Keys & Key West? Rest assured that, no matter when you decide to visit the island chain, we’re always ready to welcome you with fun-filled activities and events.