“My grandfather once said that presidents shouldn’t have descendants,” revealed Clifton Truman Daniel, “because those descendants would spend the rest of their lives having people think they should live up to their ancestors.” 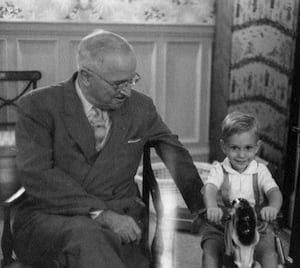 Nevertheless Clifton, whose grandfather was former U.S. president Harry S. Truman and whose mother was Truman’s daughter Margaret, is glad the commander-in-chief DID have descendants — though he didn’t find out about his heritage until he was a 6-year-old first-grade student.

“My teacher walked up to me one of the first days in school and said, ‘Wasn’t your grandfather president of the United States?’” he recounted. “And I brilliantly replied, ‘I don’t know. I’ll go home and ask.’”

Clifton will portray his grandfather in the one-man show “Give ‘Em Hell, Harry!”, an accurate and sometime humorous exploration of Truman’s life and presidency that’s set for 4 p.m. Friday and Saturday, Feb. 18 and 19, on an outdoor stage on the Little White House grounds. He is the first direct descendant ever to portray a U.S. president onstage. 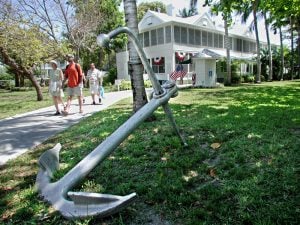 The Little White House has a fascinating heritage of its own. Before it became Truman’s retreat, the unpretentious West Indian structure was the commander’s quarters on the Key West naval station. Subsequently it was both a getaway spot for America’s 33rd president, and a place where he could consider momentous policy decisions and conduct meetings away from Washington D.C.’s more constrained atmosphere.

Now meticulously restored to its Truman–era appearance, the Little White House is renowned as Florida’s only presidential museum.

Audience members at “Give ‘Em Hell, Harry!” will be seated at bistro tables on the property’s spacious grounds, with the tables placed to facilitate social distancing.

Following the production, they can learn more about the Truman grandfather and grandson during a question-and-answer session with Clifton and a “meet and greet” gathering.

On Presidents’ Day itself — Monday, Feb. 21 — the Little White House grounds will be the setting for a traditional picnic from noon to 2 p.m. Admission is free and attendees can purchase hamburgers, veggie burgers, hotdogs and beverages from a cash bar to enjoy on the grounds. 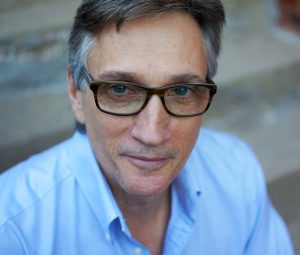 Clifton Truman Daniel, who has starred in “Give ‘Em Hell Harry” since 2017, is an actor, humanitarian, author and the first direct descendant to portray a presidential ancestor in a stage production. (Photo courtesy of the Key West Harry S. Truman Foundation)

The Presidents’ Day Weekend events are presented by the not-for-profit Key West Harry S. Truman Foundation, whose mission is to preserve and protect the Little White House State Heritage Landmark.

Although Clifton Truman Daniel has portrayed his grandfather in “Give ‘Em Hell, Harry!” since late 2017, the Feb. 18 and 19 performances are the first (and perhaps only) time he will do so at the historic Little White House that Harry Truman loved.

In fact, people are showing such interest in the stage show that there’s currently a wait list for tickets for both performances. To get on the wait list, click here.

While the Presidents’ Day Weekend performances are sure to be an unforgettable experience, those who can’t attend can still explore the Little White House. The Key West residence that played such a notable role in America’s political history is open daily to visitors, showcasing authentic artifacts and furnishings including Harry Truman’s desk and unique handmade poker table.