Known as a haven for sun-seekers, Key West might seem an unusual place for creatures of the dark to congregate — except, that is, during the annual Zombie Bike Ride. Thousands of “the bicycling dead” plan to prowl the island’s Atlantic Ocean shoreline and streets Sunday, Oct. 20, during the eerie yet oddly lighthearted event. 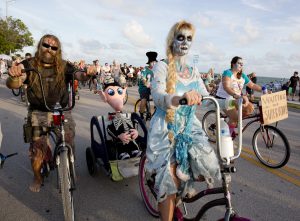 Since it began in 2010, the pre-Halloween ride has become a tradition that typically features visiting and local adults, kids and even a few bewildered pets.

Many wear “traditional” gory zombie garb paired with scary face and body paint, while others are costumed as everything from skeletons to undead prom queens in ragged finery.

Of course, it takes a lot of work to turn a more-or-less-normal human into a zombie (even without employing voodoo sorcery or a mad scientist’s fiendish schemes).

Luckily, participants in the Zombie Bike Ride can get help with their transformations. At 2 p.m., “Zombieland” opens at Fort East Martello Museum (a fascinating and supposedly haunted historic site beside the Atlantic).

There, face and body painters will be on hand to create the dead-white facial features, red-rimmed eyes, random scars and other unnerving elements vital to the “zombie look.” Zombieland’s afternoon attractions also include music, live mural painting, food and beverage vendors, prizes, giveaways, and a kids’ zone with age-appropriate activities and fun. 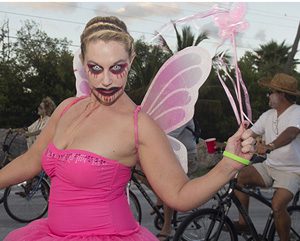 At 6:30 p.m., the unruly undead are to depart on their bicycle prowl. Applauded by scores of spectators, they’ll pedal down South Roosevelt Boulevard beside the Atlantic Ocean, past Higgs Beach, and along palm-shaded residential streets into Key West’s hauntingly picturesque downtown.

The unearthly antics will culminate in the ZombieFest Street Party in the 100, 200 and 300 blocks of the island’s famed Duval Street, with some of the fun spilling onto Greene Street.

In previous years, Zombie Bike Rides have drawn as many as 8,500 participants ranging from seniors to families with kids and dogs. And the costumes tend to be as varied as the participants.

Past standouts have included a super-sized zombie “pelican” carrying its long-dead catch, zombies in gauzy tutus (why not?), a smoke-breathing “dragon” that flapped its wings menacingly at the crowds, a swarm of “zom-bees” in black-and-yellow striped costumes, a strange flock of zombie-flamingo hybrids, a bride and groom who looked like cemetery escapees and enough eerie clowns to populate a circus.

Scary cyclists have spoofed everything from the unfortunate TV reality show “Here Comes Honey Boo Boo” to the awkward exploits of flawed politicians. 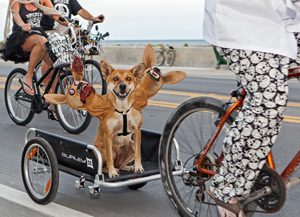 One unforgettable zombie biker pulled a cart carrying his real-life canine companion — whose costume was enhanced by two extra heads.

Registration to ride is $5 per person and includes admission to Zombieland. Artists there can set their own prices for face and body painting.

While many television viewers are obsessed with “The Walking Dead,” the uncanny cycling cavalcade offers a live-action adventure for zombie fanatics — and it benefits the Key West Art & Historical Society.

The Zombie Bike Ride, by the way, is only the beginning of the island city’s pre-Halloween revelry. The spooky spectacle coincides with the first weekend of Fantasy Fest, the outrageous annual costuming and masking festival that runs through Sunday, Oct. 27.