Underwater Pumpkin Carving and Other ‘Wrinkles’ on Upper Keys Fun

In Key Largo, it’s all about the realm beneath the sea. Key Largo has been dubbed the dive capital of the world — with good reason, since it draws underwater enthusiasts from around the globe to experience its diverse coral reef ecosystem alive with sea life. 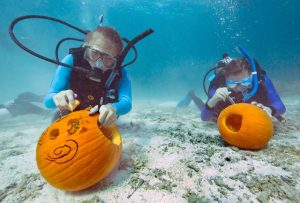 It’s the home of America’s first undersea preserve, the fascinating John Pennekamp Coral Reef State Park; and one of the largest vessels ever sunk as an artificial reef, the 510-foot Spiegel Grove.

But Key Largo — and for that matter, the Upper Keys overall — can boast another oceanic claim to fame: a weird and wonderful array of lighthearted underwater events.

For example, like other fans of autumn amusements, divers celebrate the season by carving pumpkins. But they do it underwater!

The 21st annual Underwater Pumpkin Carving Contest is set for Saturday, Oct. 5, off Key Largo. Armed only with their creativity and dive knives, pumpkin carvers will descend about 25 feet beneath the surface in the Florida Keys National Marine Sanctuary to craft their jolly jack-o’-lanterns. In addition to “making a splash,” they compete for prizes.

As the divers pare away at funky, fun or frightening facial features, quick-swimming reef fish are likely to dart in for a close look at the knife-wielding action. They might even nibble on stray pieces of the natural orange gourds.

Past pumpkin entries have featured everything from the traditional triangle eyes and snaggle-toothed grins to dolphin silhouettes and shark-mouthed sneers. One crafty past competitor even created a “fishy” skeleton. 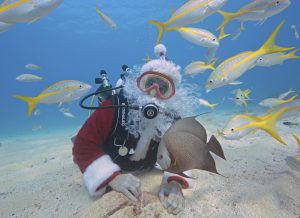 Who is this jolly fellow bringing holiday cheer to yellowtail snapper and an angelfish in the Florida Keys National Marine Sanctuary? (Photo by Bob Care, Florida Keys News Bureau)

The contest is presented by Amy Slate’s Amoray Dive Resort, and prizes — including a dive trip for two — await the top pumpkin sculptors.

Pumpkin carvers aren’t the only unusual characters known to immerse themselves in Key Largo waters. In fact, some lucky divers might even catch a glimpse of a sub-sea Santa Claus in December, before he embarks on his round-the-world sleigh ride.

The jolly red-garbed guy appears pretty much every year before Christmas, seeming perfectly at home in the underwater environment — bushy white beard and all.

Wearing scuba tanks and a dive mask, Santa glides over shipwrecks and reefs, offering holiday wishes to fishes as part of a fundraiser for a local children’s charity. Last year, instead of reindeer pulling his sleigh, Santa was towed by a SeaBob underwater sled sporting two faux antlers.

The annual Underwater Easter Egg Hunt takes place in the Upper Keys each year sometime around the holiday. Egg-seeking divers submerge to search for sunken hard-boiled treasure (real eggs decorated with non-toxic colorings, to prevent any negative ecological impact) near one of the Keys’ pristine shallow reefs. 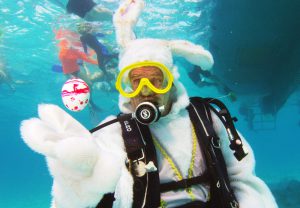 Unlike the above, there’s one underwater event dreamed up for Key Largo that never actually happened: a world-record bid for “extreme underwater ironing.”

Yes, ironing. Almost 10 years ago, event organizers hoped to draw approximately 100 divers to perform the unpopular domestic chore — ironing items simultaneously within a 10-minute time limit — at a shallow dive site in the waters of the sanctuary.

They were trying to break a world record, held at the time by an 86-person group of British scuba divers (and by the way, participants had to provide their own ironing boards and irons).

In covering the British event, a major news agency called the extreme underwater sport “not a complete waste of time.”

Sadly, a forecast of rough seas and strong winds forced the Florida Keys event’s cancellation — even though many ironing fanatics wanted to “press” on.