Nearly everyone who visits the Florida Keys samples grilled locally caught yellowtail snapper or mahi-mahi, steamed Key West pink shrimp, clawless Florida lobster and chilled stone crab claws. And since their just-off-the-boat freshness is all the adornment they need, they’re often prepared with a simplicity that perfectly enhances their flavor. 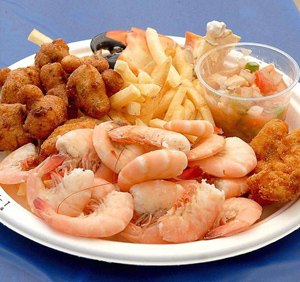 Indigenous shrimp, fish and other seafood have inspired a number of flavorful festivals around the Keys.

With herbs and garlic to dress broiled fish, melted butter to bathe bites of lobster, or an uncomplicated sauce for shrimp or stone crab, these saltwater delicacies make the basis for a wonderful meal.

Of course, given the variety and abundance of the fish and seafood in Keys waters, it’s no wonder the island chain’s indigenous cuisine relies on it. (FYI, in recent years lionfish, an invasive species prized for its light white meat, has joined its native cousins on restaurant menus.)

In the Keys, dishes are often flavored with tropical fruits and spiced with influences from the region’s rich melting-pot history. This memorable cuisine is behind many local eateries’ success, and has inspired culinary experiences from celebrations to classes.

For example, there’s a seriously great quartet staged each January. Cuisine fans flock to enjoy Uncorked: the Key Largo and Islamorada Food and Wine Festival, the Florida Keys Seafood Festival showcasing the ocean’s bounty and the fishermen who harvest it, the Key West Food and Wine Festival, and the culinarily competitive Master Chefs Classic.

Each March the Middle Keys are the site of an eagerly anticipated feast called the Original Marathon Seafood Festival. Other appetizing offerings traditionally include the Key West Lobsterfest saluting the opening of the annual Florida lobster season, a wacky stone crab-eating contest in Marathon, and the Key Lime Festival inspired by the Keys’ signature dessert — Key lime pie. 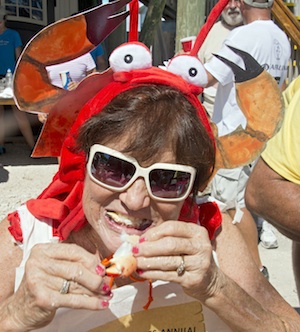 Historians believe the tangy treat, linked to Key West’s colorful past, was created in the 1800s by “Aunt Sally,” a cook for millionaire ship salvager William Curry. Today each chef places his or her own hallmark on this special dessert, but its primary ingredients are condensed milk and tiny yellow Key limes — often nestled in a graham cracker crust and finished with whipped cream or meringue.

As well as classes, food tours are popular in the Keys — some offered regularly and some by appointment. Culinary connoisseurs can even concoct their own “moveable feast” by mapping out a group of appealing restaurants and sampling tapas, appetizers and small plates at each one in a “progressive dinner” format.

In addition to enjoying indigenous cuisine throughout the island chain, visitors can take home tasty souvenirs to help sustain them until their next vacation. The wares of local artisan food crafters, a master chocolatier, beekeepers and even a saltmaker can be relished as reminders of the simply delicious Florida Keys.