By Carol Shaughnessy|2021-05-13T15:08:33-04:00December 16, 2020|
Mike Price, an infection prevention specialist with iP Program, oversees the demonstration of an ultraviolet light-emitting robot at Key West International Airport. Key West’s airport is among the first in the country to acquire one of the sophisticated robots, which is programmed to flood areas with UV light to kill COVID-19 and other viruses. The UV light is so bright that the robot can only be used when people are not present. (Photo by Rob O’Neal, Florida Keys News Bureau)

No one can deny that 2020, and its holiday season, are different than just about any other year in memory. Whether grief and loss, economic fears or the stress of isolation, almost everyone is feeling the effects of the world’s coronavirus pandemic.

Yet even so, it’s possible to find occasional bright spots that bring hope — whether based on the emergence of a COVID-19 vaccine, technological advances that increase health protection or examples of compassion and care. 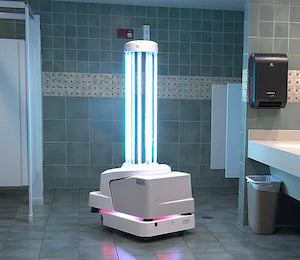 And as the 2020 holidays draw ever closer, a couple of notable bright spots come from the Florida Keys.

The ultraviolet disinfection robot, developed by UVD Robots, is designed to remove 99.9 percent of pathogens including COVID-19. Not only does it provide non-chemical disinfection, but Key West International Airport is among the first airports in the entire U.S. to acquire one of the sophisticated units.

The robot stands nearly 6 feet tall, weighs over 300 pounds and can move around the airport autonomously after being programmed and “mapping” the spaces. Its autonomous operation is vital, since the light it emits during the active disinfection cycle is so intense that it can only be used after hours when people aren’t present.

A human operator ensures that people are away from spaces the robot sanitizes, and monitors its progress via an electronic smart tablet. To further protect people from UV-C exposure, a sensor will shut the light down if a human presence is detected.

According to officials, the robot can disinfect the airport’s interior spaces in approximately 2.5 hours — adding another level of safety to the facility’s already intense efforts to protect the health of travelers to the Keys. 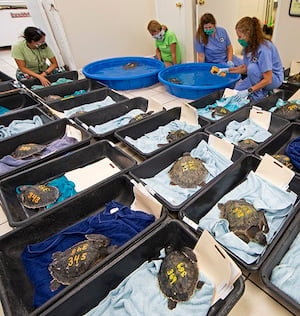 Staff at Marathon’s Turtle Hospital examine many of the 40 “cold-stunned” Kemp’s ridley sea turtles that were flown to the Keys after being rescued from beaches in Cape Cod, Massachusetts. (Photo by Bob Care, Florida Keys News Bureau)

Almost 50 miles up the road from Key West in Marathon, an unusual group of “travelers” arrived in late November desperate for warm weather and TLC: 40 critically endangered Kemp’s ridley sea turtles that had suffered “cold stunning” in the waters off Cape Cod, Massachusetts.

“Cold stunning” is a hypothermic reaction that occurs when sea turtles are exposed to cold water for a prolonged time, explained Bette Zirkelbach of Marathon’s world-renowned Turtle Hospital. It typically causes them to stop eating and swimming.

Found stranded on beaches as a result of the condition, the juvenile turtles were rescued and then flown from New England to Florida Keys Marathon Airport. Their flight was made possible by a volunteer group of private pilots dubbed “Turtles Fly Too,” who donated their aircraft, fuel and time — and transported the turtles in sturdy, towel-lined banana boxes.

Once they landed, they were met by dedicated Turtle Hospital staff who whisked the “patients” to the facility for testing, treatment, care and rehabilitation.

The Turtle Hospital opened in 1986 as the world’s first state-licensed veterinary sea turtle hospital. With compassion and skill, its staff has since treated and released more than 2,500 sick and injured sea turtles — and assisted scores of hatchlings that went astray after leaving their nests.

As you celebrate the very different holiday season this year, look around your world for whatever positive, uplifting elements you can find. Even in the coronavirus era, they exist and they bring hope. And after all, isn’t hope what the holidays are really all about?