A Presence of Peace Beneath the Sea

Also called “Christ of the Deep,” the 9-foot bronze has become a symbol for Key Largo’s John Pennekamp Coral Reef State Park, which is part of the sanctuary. 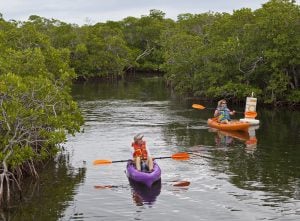 Located about 90 minutes from Miami by car, Pennekamp was dedicated Dec. 10, 1960, as America’s first underwater preserve — capping efforts by a farsighted group, including the late “Miami Herald” editor John Pennekamp, to create it.

Since then, the park that bears Pennekamp’s name has become a magnet for visitors from the U.S. and many other countries. They come to explore its nature trails and beaches, and observe the fascinating underwater wildlife that lives within its 70 nautical miles.

Many recognize the park’s mission of protecting and preserving the natural resources inside its boundaries — particularly a section of the continental United States’ only living coral barrier reef, an environmental treasure that parallels the Keys island chain.

Among the park’s most inspiring attractions, alongside the natural ones, is the large-scale undersea bronze. The Key Largo sculpture is a replica of an Italian original called “Il Christo Degli Abissi” or “Christ of the Abyss.” Its arms uplifted in a gesture of invitation, it is considered a symbol of peace and understanding among mankind.

Visitors are seemingly drawn to its presence, eager to snorkel, dive or cruise aboard glass-bottom boats to view and photograph the majestic statue. Resting in less than 25 feet of water, it can be found about five miles off the island of Key Largo at a site called Key Largo Dry Rocks — a box canyon that rises around beautiful coral formations.

Kimberly Triolet (left) and Jorge Rodriguez kiss after being married next to the “Christ of the Abyss” statue off Key Largo in the Florida Keys National Marine Sanctuary. (Photo by Bob Care, Florida Keys News Bureau)

Created by artist Guido Galletti, the original was placed in the shallow San Fruttuoso Bay near Portofino, Italy, in 1954. Galletti also crafted the mold for a Christ statue that was cast for Egidi Cressi, a well-known diving equipment manufacturer, who donated it to the Underwater Society of America in 1961.

“Christ of the Abyss” traveled 6,000 miles from Italy to Chicago, where it was then placed in storage. Although state dive councils in Illinois, Michigan and other locales petitioned to have the bronze, it was decided that the clear waters of Pennekamp Park should be its final resting place.

In late 1963, the statue was transported to Orlando and placed on display. It was later exhibited at Florida’s St. Petersburg and Palm Beach, and subsequently arrived in Key Largo — where it was stored outdoors at Pennekamp Park.

Finally, with the help of local dive operators and park officials, a small budget and donations of concrete for its 20-ton base, “Christ of the Abyss” was lowered beneath the surface and secured to the seabed.

Today, as well as an internationally renowned landmark, the 4,000-pound bronze is a famous Upper Keys spot for celebrating underwater weddings. During its 55 years beneath the waves, the compelling statue has become one of the most photographed sub-sea sites in the world — and its timeless features and welcoming arms, seemingly raised in eternal benediction, make it a perfect place to exchange “I do’s.”