Creative recycling, offbeat artistry and lively “people power” combine into a spectacle that entertains spectators in Key West each May, during the lighthearted Papio Kinetic Sculpture Parade. 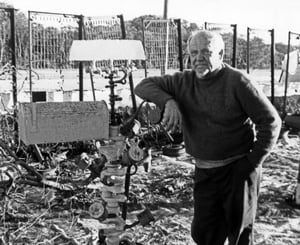 Folk artist Stanley Papio is captured on camera in Key Largo in 1977. (Photo provided by the Florida Department of State, Division of Library & Information Services)

Intriguing as that description might be, it doesn’t even BEGIN to describe the complex character that was Stanley.

When he settled in Key Largo in 1949, he was just a former amateur boxer and wrestler. But after he opened a welding business on his property, the seemingly mundane enterprise evolved into a far more imaginative pursuit.

Stanley began making “junkyard art” constructions welded together out of scrap metal from recycled car parts, beds, pipes and other discarded iron and steel. Much to the dismay of his neighbors, he encouraged people to drop off decrepit cars, washing machines and other “art supplies” in his yard for future use.

Stanley’s welded sculptures, blending satirical social commentary and rough-hewn humor, eventually overran his property and morphed into a roadside exhibition that he dubbed Stanley’s Art Museum. By the time he died in 1982, his visionary craftsmanship was beginning to earn him a bit of notice from critics, collectors and even museums. 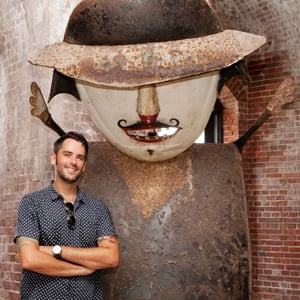 After Stanley’s death, much of his work was donated to the Key West Art & Historical Society. Today his creations are recognized as culturally important American artwork, and Stanley himself is rightfully renowned as a pioneer of recycled art.

To salute his talent for repurposing ordinary objects into extraordinary artistry, the society established a permanent museum exhibit showcasing his pieces — as well as the annual parade that encourages others to follow his innovative and eco-friendly example.

The family-friendly procession is scheduled to kick off at noon May 4 outside Key West’s Custom House Museum at 281 Front St.

Papio-inspired artisans will propel vivid sculptural floats with moving parts, elaborately decorated bicycles and other mobile masterpieces along parts of Front, Duval and Southard streets. And every one of them will be powered by human effort alone.

“People of all backgrounds and all experience levels come together to embrace recycling, embrace our environment and embrace art,” marveled Michael Gieda, executive director of the Art & Historical Society.

The 2018 procession combined repurposed materials, ingenuity and a dash of steam-punk flair. Standout entries included a huge red dragon whose scaly skin was made of bubble wrap, a futuristic turquoise rocket, an 8-foot-tall rooster and a multicar “train” recalling the historic Florida Keys Over-Sea Railroad. 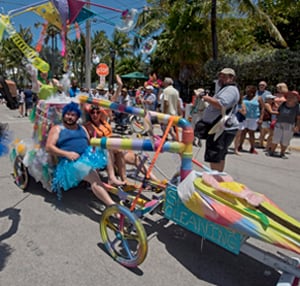 The 2019 Papio weekend begins at 6 p.m. Friday, May 3, with a presentation at the Custom House on the art, traditions and history of parading. Admission is free, but registration is required.

Saturday’s parade will be followed by an awards ceremony and celebration at Key West’s Truman Waterfront Park Amphitheater, a wonderful open-air venue at 21 E. Quay Road. Attendees can rock to the sounds of Tony Baltimore & the Wilde Awake — and the youngest can experience a recycled art workshop in the amphitheater’s Kids Zone.

The free-admission Papio Museum Day will intrigue and inspire fans of renegade art and quirky creativity — and honor the colorful legacy of Stanley Papio, a Florida Keys character unlike any other.